What I Really Think: #9 - A Caution (With a Geeky Coding Analogy) 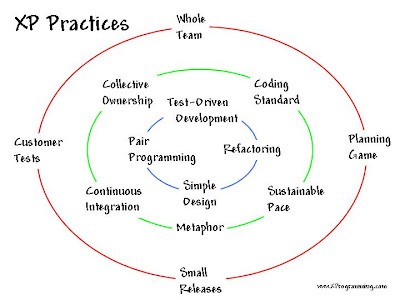 A gent named Preston commented on my recent post about church community size, and he really got me thinking. (Thanks, Preston - seriously.) His concern, if I'm reading him correctly, is that he's seen the exact opposite of my claims regarding church community size and rank-and-file participation in ministry. In Preston's experience (again, if I'm hearing him), in smaller churches, the one pastor or clergyperson in charge typically does everything, and opportunities for other folks to get involved are limited. But once a church reaches sufficient size and critical mass to have (and need) a variety of programs, the pastor necessarily needs to delegate authority, and there are many more opportunities for folks to get involved in ministry. And Preston, you're absolutely right.

But wait (I thought, when I read Preston's comment), I know that's true of a lot of small churches, but in the case of the community I'm a part of, we don't even have a single person in charge, nor do we have anyone designated as "clergy". The closest we come is a leadership team of three with equal "authority" (i.e., not much), and just about everybody in the community rotates into various leadership roles when their gifts, passions, and schedules allow. Although I've written about questioning the role of "pastor" (and especially "senior pastor") in this same series, I guess I had sort of forgotten how important that is in conjunction with my claims about small community size and participation in ministry - and also about the fact that very few people do church like we do in that respect. And that got me thinking.

Maybe five or six years ago, I started reading about a programming methodology called eXtreme Programming (XP - no relation to Windows). What Preston's thoughts made me realize is that, among other interesting parallels, one of the things that XP has in common with the way communities like ours do church is the following: "the practices must support each other". Not just the people, but the practices.

XP and other agile programming methodologies blew people's minds when they were being developed in the 90's, because they advocated practices that just seemed bizarre and unworkable - like pair programming and collective code ownership and on-site customers as part of the development team. And people said, "well, clearly we can't change to all of those whacked-out practices at once, but let's try one or two." And lo, their suspicions were confirmed: alone, in the context of not changing the rest of the development process, without the support of the other practices, adopting one or two of the practices was a total disaster.

The practices must support each other. Take a traditional church, and just try changing one or two things to make it more like what we do, and I bet you're in for a world of hurt. It's only when these "practices" are taken together - small congregation, no lay/clergy divide, distributed leadership, "open source" church, no big expenses (building, etc.), no concept of membership, "centered-set" permeable community borders yet a big emphasis on relationship in community, a postmodern, humble, generous approach to doctrine and practice, etc., etc. - that they have a good chance of working. As a mentor of ours has said in a slightly different context, everything must change. Or, you're probably gonna wish you changed nothing.

My point is certainly not that one must do everything exactly like we do it at Common Table for church to work - or even for "emerging" church to work. XP is only one of many very workable agile software development methodologies - they have much in common, but their practices differ. But one thing they all have in common is that their practices must support each other. Start with a very different methodology, and adopt only one or two practices from XP or Scrum or whatever, and you'll find out right quickly that that was a terrible idea.

So my fear, and my caution, is that taking a similar approach with "emerging church" practices - starting with a traditional church, and experimentally adopting one or two or even a handful of "good ideas" from the emerging conversation - is probably not going to get you very far. Worse yet, the results could be disastrous for you, your congregation, and all manner of innocent bystanders.

Must everything change? Honestly, I'm not sure. But I do believe that in any workable system, the practices must support each other, or the whole thing is likely to come crashing down around our ears - or (perhaps worse) to succeed...in becoming something we'd never have hoped for. And not in that serendipitous, good sort of way.

So...if God is calling you to be bold, then be bold. But if you're not sure, then keep praying, and in the mean time, caution might be advisable. I guess it's possible to dabble in revolution, but I'm not sure it's possible to do so very productively.
Posted at 23:17

I'm loving this series, Mike, and this may be your best post yet! (while you're on such a hot streak, d'you think you might post on 'the other side'? About how our little utopia has it's dark sides, too: e.g., while we can easily make small decisions-- and big ones too-- we're often pulling our hair out with medium-sized stuff, where our brethren with titles and committees just sail that stuff through)

1.) So, does this mean that hybrid groups like Presbymergent, Methomergent, and Anglimergent are unhelpful, or suggesting something impossible?

2.) The metaphor you use today reminds me of our new-monastic friends all over the country. I wonder if "The 12 Marks of New Monasticism" (which are, as the title suggests, descriptive, rather than prescriptive) function similarly. Perhaps engaging the list selectively just makes things that much harder.

The first mark, in particular-- 'living in the places abandoned by the empire'-- enables and allows (and forces!) so much of the life that they're after. i.e., living in an abandoned building will mean that you can live off of $150/month (so at tsw), which will radically affect the job you can take, and the work you do, and the ministry you can engage, and the neighbors you know, etc., etc.. But *not* doing that will have huge effects, and will doubtlessly bring huge headaches as you try to build that kind of community in a different kind of (economic and sociological) environment.

I've not been conversing much on this b/c I'm in the midst of a crazy busy month, but I'm really enjoying the series. This one in particular I think is great. I've had similar inclinations on the 'everything must change' front in relation to the way my particular denomination is structured--particularly addressed to issues of multiculturalism (or the lack thereof) in the ECUSA. Dabbling doesn't work, but a different system might. I could say more, but I've got so much internetting to do, and I've got to start making dinner for my wife...