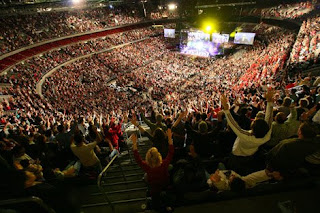 So here's the deal: In previous posts, I admitted that I'm sure there are some individuals and communities for whom the traditional pastor role is a good fit, and I opined that denominational hierarchies are no more obsolete than public libraries. Along similar lines, I am willing to allow that there are probably good reasons for certain church communities to grow to more than, say, 75-100 active members (including children).

However, I must admit that I have trouble thinking of any.

'Cause this is the rub: I can't think of anything that a single church community can do which a network of communities working together can't do (though admittedly, such networks would probably move more slowly in many cases). On the other hand, I can think of a bunch of thorny issues that begin to arise when communities get so big that anonymity is possible - which probably happens when they approach 50 or 70 adults; fewer if the leadership responsibility is concentrated in one or two individuals. Once anonymity is possible, the church ceases to be a community of followers of Jesus.

Let me unpack that statement, because it is, admittedly, a bit extreme.

First of all, I believe very strongly in radical welcome as a core component of the gospel. I neither believe, nor desire, that every person who becomes a part of a church fellowship considers herself a "follower of Jesus". I think a test of any kind - doctrinal or practical - as a barrier to belonging within a church community is nothing short of a betrayal of the radical openness of Jesus. So I don't believe that only "followers of Jesus" should be allowed to join a church - but I do believe that anyone joining such a community should have no doubt about what kind of group it is. It's a community of people trying to follow Jesus together. But here's what it's not:
So - and this is a serious question - why "church growth"? Why don't communities divide into networked smaller communities when they become so large that they are, de facto, no longer a community any more anyway? I can think of some practical reasons:
As you might have guessed, I don't buy into any of those assumptions. Big numbers, single-community church buildings, full-time paid staff, MDivs, and clerical collars are not bad things. But to assume (as most people seem to) that they are universally desirable and necessary is a mistake, in my opinion. A mistake that can turn communities of Jesus-followers into housing developments made up of a mixture of disciples and consumers. Kind of like the neighborhoods many of us probably live in. Is it any wonder that so many of our neighbors can't imagine what difference the church could possibly make in their lives?
Posted at 22:52

Your previous posts in the series made my day; but this one may contribute to saving my life..

When your earlier posts had those balanced qualifiers, I appreciated it. I tend to be all or nothing in theory (in practice I wimp out).

But when you stated this time "I am willing to allow that there are probably good reasons...

However, I must admit that I have trouble thinking of any"..

I whooped an amen.

You know, since I was trained in the system, and since a previous church had 688 members (but who was counting..yeah, right(; I have been saying about our current ministry "If/When we get to 120, then that's the tipping point and time to plant a new one."

But even that number is too big.

An experience a year or so ago really nailed me.

Thanks for letting God use you to mess up my life,

Wow - thanks, Dave. I'll trust your discernment, but I hope I'm not actually as full of BS as I sometimes think I am. Of course I'm really not sure about my numbers - our church is something like 35 adults and our kids right now, and I feel like if that doubled, we'd certainly know everybody's names - but would we actually know everybody? I feel like it'd be getting to the natural boundaries of that. But I really don't know.

Great post in a great series of posts. Of course it's very different in some ways this side of the pond... actually it isn't really. I've posted a few thoughts arising from yours at http://bishopalan.blogspot.com/2008/03/churches-that-grow-too-big.html

Many thanks and God bless

"But once it's possible to simply fall through the cracks - to neither know or be known and for no-one to realize that - it's not a community."

I need to save that one in my back pocket. Wow. Thanks -- you've nailed what the word "community" means!

Using what I've learned from sources you probably detest, in some sense the opposite of what you say is true. Congregations with larger average Sunday attendance tend to be able to integrate new members more easily. In the congregations that you are referring to - the "single-cell organisms" - tend to have greater boundaries, with the movement from "outside" to "inside" (that is, taking on ministries and leadership within a church) typically takes as long as 3 years.

However, when average Sunday attendance reaches the number you seem to detest - 120-150 - the congregation will necessarily have moved to a "multi-cellular organism" - and by that, through leadership structures that are less hegemonic, people integrate and build ministries and relationships faster.

The biggest hurdle between your ideal size, and what some would call a program sized church, is that relationships are no longer mediated by one cleric. This is what tends to be most difficult - not that relational integrity is lost, but that people need to begin to imagine that their primary relationships in the church are no longer cultivated through one leader.

Which, to my mind, is the healthier, and less clerical, alternative.

@preston - hey, I'd be interested in these sources of which you speak, if you want to reference them. Not sure how you're figuring out what I may or may not detest, but the list of things I detest (beyond things we probably all agree are sinful or tragic) is actually pretty short, so please send me a link or two, if you want to.

I think I can guess at the sort of thing you're thinking of when you talk about small congregations with one leader, but keep in mind that that's not a universal assumption. The church community I'm a part of (maybe 35 adults and our kids) doesn't have any clerics - the closest we come is a leadership team of three with equal "authority" (i.e., not much), and just about everybody in the community rotates into various leadership roles when their gifts, passions, and schedules allow. I am familiar with the sort of small "single charismatic leader" churches you're (I think) thinking of, but not all small churches are like that.

I can certainly be accused of making the same kind of generalization about larger congregations, but I want to note that the issue I find more pressing than leadership is discipleship. It might often be easier, in larger congregations with programs, etc., for some folks to break into a leadership role of some kind. But unfortunately it's also much easier - in my experience, anyway - for folks to be a part of larger congregations without ever really becoming disciples of Jesus. If it's possible to be an anonymous consumer of spiritual goods and services (which is really, really not the same thing as a follower of Jesus), some folks will choose that option, in my experience.

Sorry, didn't mean to make too many assumptions of what you detest . . :-)

The Alban Institute has lots of books on the topic of average Sunday attendance, as it relates to the character of the community and what sizes say about what the community tends to expect, as related to growth. One good place to start is a book called "One Size Fits All?" (I think I got that right.) This stuff is helpful - but it's not the gospel. This may be what makes many of us anxious, when growth becomes primary, and the primary influence on worship and proclamation. However, the detailed research and analysis in how church groups tend to act, relative to their size, has been very helpful for me.

Like you say, not all churches are the same. But I've found that their broad categories pretty close to what I see on the ground. Even when the leader is not particularly charismatic, patterns are regularly discernible. I wouldn't call myself charismatic; but that doesn't mean where I minister that people expect me to be able to be close to all the parishioners - which is only possible up to a point; if the parish ever does grow (through growing disciples) there would have to be an adjustment to more lateral relationships.

Can you make a strong distinction between leadership and discipleship? You can surely have leadership without discipleship, but I would say that part of development and growth into discipleship may well mean an eventual shift into some kind of ministry leadership. And even if this is not always true - that discipleship leads into leadership - without leadership you won't have opportunities for discipleship. That is, someone needs to organise the small group, the trip to the soup kitchen, etc.

At risk of making another assumption - please correct me if I'm wrong - is your community a fairly new one? Or is it part of a tradition of this kind of leadership? I ask because I'd be curious about how the research into community size interfaces with new communities. Does it still work, or does it assume congregations of long standing, etc.

Preston, all your points are well taken, and I think you're right on the money. I'm familiar with the Alban Institute - I get their emails about new offerings, though honestly I haven't made the time to read much of their stuff. (But that's a problem in general with me - I don't get a chance to read anywhere near as much as I'd like to, which is why I'm cutting to part-time on my day job.)

Your point about the link between leadership and discipleship is certainly true - I was making a false dichotomy.

And yes, as you rightly guess, the (main) church I'm a part of is a new community - planted in 2001 by a former Epsicopal priest, who left after a year to go back to TEC. (Since he left, we've been quote-unquote "lay led" by a leadership team of three or more - plus everybody else.) :-) We have "Anglican DNA" from our founding pastor, but these days I'm the only Anglican who's part of the sommunity. (I'm a TEC guy and am still active in youth ministry, as well as one or two other things, at my Episcopal church.)

So yeah, we're new, and pretty different in a lot of ways from most churches, which means we probably screw up the research which is, no doubt, rather accurate in the general case. (For more on the stuff you got me thinking about, see my most recent post.)

Thanks, Preston, for the great and thought-provoking comments!