Check out this video: beautiful little snippets of stories of what God is doing in vibrant, struggling, little, weird-ass communities across the continent. (It's happening elsewhere too, but I'm pretty sure these folks all are in the US.)

Gives me chills. My friends are such tools!

Check it out. (Also, especially East Coast and ESPECIALLY DC-area-peeps: stay tuned for news of an event in the spring that'll be all about fostering these kinds of communities!)

OK, all right, check it out:

My good friend Moff posted on teh Facebook about this story. Here's how it begins:

VATICAN CITY — In an extraordinary bid to lure traditionalist Anglicans en masse, the Vatican said Tuesday that it would make it easier for Anglicans uncomfortable with their church’s acceptance of female priests and openly gay bishops to join the Roman Catholic Church while retaining many of their traditions.

This has been the cause of much hand-wringing in Anglican circles, and in the press. My opinion (as expressed in a Facebook comment), while not particularly noteworthy, seemed wordy enough to merit reproduction on the blog. So here it is, FWIW:

Speaking as a (remarkably) piss-poor Anglican, I say: whatevs. Bottom line: moves like this will cause some people pain, with which I sympathize. It will cause other people to rejoice, with which I also sympathize. And when people are unhappy with what's going on in their corner of the Church, they will do one of three things: suffer on where they are, find a different portion of the Body which suits them better (a possibility which this move enables for some), or get fed up with the whole thing and leave. And through it all, the Church remains one (and many), holy (and embedded), catholic (and particular) and apostolic (and welcoming - occasionally).

So when stuff like this - or a schism or an ecumenical agreement - happens, I just try to pray with the horrified and rejoice with the rejoicing. The church will still be about individuals and communities and their relationships with God. These high-level structural changes are the equivalent of, say, urban planning. It certainly influences the kind of life that's lived by the individuals, families, and communities affected - but ultimately the life is lived by those communities and families, wherever they are.

Actually, the subversive in me is kind of excited by the prospect of lots more married Catholic priests. Harbinger of further change in the world's most inertial human organization?
(Note: credit belongs to LeRon Shults for the parenthetical counterpoints to the creedal marks of the Church - one/many, holy/embedded, etc.)
Posted at 17:27 1 comment: 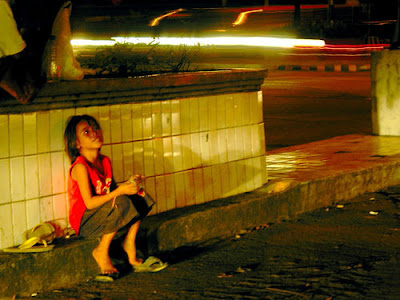 Note: This blog post is almost identical to one that I just contributed to a local web site for young adults sponsored by a mainline church denomination. The difference is that this is the original version, with Lots of Strong Curse Words. This is how it originally came out. I cleaned it up for the YA website. I'm not going to link directly to the post on that website, because I do not believe that my potty mouth is helpful to their mission. However, if it amuses you to compare the two, feel free to contact me and I'll send you the link. Peace out.

Also, alls y'all beloved C21 peeps, this is all I've written about the conference so far (well, all that's longer than 140 characters), and because I've lazily used it for double-duty as described above, it's not exactly a worthy C21 recap. Just by way of apology. Y'all rock. Just sayin'.

Last weekend, I was privileged to participate in a conference in Minneapolis called Christianity21. The idea was this: 21 presenters were given 21 minutes each to share with us a bit of their vision for Christianity in the 21st century. And oh by the way, each of the presenters was female.

This was not a women's conference. Participants - and we were indeed participants, not just attendees - seemed to be split about 50/50 by gender. Nor was it a conference about "women's issues" in the Church. The visions shared by the presenters did expand the conversation into areas related to gender, incarnation, and sexuality which I have not seen explored before in a church conference. And the emotional depth of the content was unusually powerful - it packed a wallop from which I am still recovering. But the theological and practical issues explored were broad and deep and applicable to anyone and everyone attempting to follow Jesus in this time of unprecedented change.

There's a lot I could say about the remarkable people I met, learned from, and was changed by during those three or four days in Minnesota, but given limited space I'm just going to focus on one change in myself since last weekend: I'm having a crisis of faith.

During that weekend, many of us - presenters and participants alike - told parts of our stories to one another. Some of those stories were told in front of a room full of hundreds of people. Others in intimate groups of two or three.

And during that weekend, I guess I heard one too many stories of people - achingly beautiful, powerful, radiant people - who had been shat upon by the universe. There's no other way to put it. These people, many of whom I'm blessed to call my friends, have been fucked over by life in ways that make my heart break. Some because of their gender. Some because of their sexuality. Some because of their ethnicity. Some due to "bad luck" or misplaced trust or simply being born into a terrible situation. And without exception, these people had somehow lived through this to become loving, giving, whole and healthy human beings. Not that they aren't fucked up - we all are. But somehow they'd lived - really lived - through that. And that survival was invariably bound up with the experience of being loved...and somehow believing that that love was real.

Of course I know and love lots of people with stories like that. But for some reason, last weekend pushed me over a precipice, and forced me to look at my life.

I am someone who pours a considerable amount of time and energy into volunteer work, most of it church-related. And the vast bulk of that time and energy, I'm forced to admit, is focused on "us" - we who are already warm and safe and on the inside. If my work is outward-directed, it's usually merely meant to meet folks' material needs - not to demonstrate the scandalous message that's at the heart of the gospel: you are loved. It doesn't matter what came before. You are loved.

This got me thinking about the beatitudes. The Gospels record two different lists of "blesseds" from Jesus: one in Luke 6, where Jesus says "blessed are the poor"; the other in Matthew 5, where Jesus says, "blessed are the poor in spirit". For years, I've assumed that old Matthew had merely embellished the more accurate memory recorded in Luke. Surely Jesus was really talking about the literal poor, and "poor in spirit" is just, well, spiritualizing Jesus' more earthy message.

But since last weekend, I've been thinking: maybe both versions really are what Jesus meant. Maybe "the poor in spirit" are the same as "those who've been shat upon by the universe." Maybe that's what makes you poor in spirit. Unless it leaves you irreversably broken.

Of course, "the poor" are a prime example of "the shat upon", but "the shat upon" is a larger category than "the poor". I feel like sometimes we churchy types beat ourselves up because we are so bad at connecting with "the poor", and end up paralyzed into inaction. And I certainly don't want to avoid opportunities for solidarity with people who are poor. But right now I'm meditating on the meaning of the Matthew version of that beatitude and thinking that there are many, many folks who have been fucked over by the universe. Not all of them are "poor". And for all the volunteer hours I put in - for all my effort to put my privilege as a straight, white, American male to good use - almost none of those hours are spent connecting with folks in ways that demonstrate this truth: no matter what has gone before, we are loved.

That needs to change.

(And it's true: the "we", the "us", the people who are, for the most part, safe and warm and on the inside - we also are, have been, will be shat upon by the universe. And how much more should that truth drive us to find and love others just like us?)

I'm not sure where I'm going to go from here, but I know one thing: wherever it is, the people who accompany me on this journey will be the Church. Not necessarily any particular church institution or denomination. Not necessarily people who would even affiliate with a church. This loving, reconciling work is done all the time by folks of any faith and of no faith.

But after last weekend, this is something I know in a deep place: this is the work of the Church. To connect with folks whom the universe has treated like shit, and somehow help them see the gospel, the good news. "You are loved; you are embraced." Sometimes the Church gets busy with other work. Sometimes the Church is even the institution doing the shitting. But in every one of my friends' stories last weekend, the people who showed them this gospel - who somehow enabled them to believe that they are loved - these people were the Church. And this is the work of the Church.

And please, please help us, God. There is so much work to be done.