What I Really Think: #8 - Gender and the Church 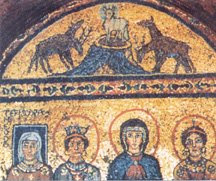 I thought about skipping this topic, and then I thought about making a really short post on it. Something to the effect of, "In my experience, women typically make better church leaders than men. So, for God's sake, stay the hell out of their way." But I realized that I have just a bit more to say than that.

I'm not kidding about my brief statement. Most (certainly not all) of the most amazing church leaders I've known have been women. And while I can understand why some sincere Christians conclude that scripture forbids women from being church leaders, I think the biblical case for that position is weak, for reasons similar to the ones that make lead me to conclude that there's no compelling scriptural case for the sinfulness of gay sex. (See here.) So given that they're so damn good at it, and given that I don't know any good reason to stand in their way, I anticipate and celebrate a future in which the Church is mightily transformed, for the better, by the leadership of women.

But of course, it's not that simple. A lot of mainline folks I know seem pretty smug about the "fact" that their denominations have "solved" this issue - unlike those backward evangelicals - but women leaders are still a small minority in the mainline, and female senior pastors even more so. (Much more so). And of course, judicatory-level or denomination-wide female leaders are even rarer. And the inroads that women have made have done little, so far, to transform a very traditionally "male", very "corporate executive" model of church organization and leadership culture in the mainline churches.

However, thank God, we are now blessed with a great many female church leaders - especially in the mainline - who have either overcome "women can't lead" enculturation, or actually grew up free of that bullshit. Thank God for these women! But they (along with us fat and privileged Y-chromosome types, of course) need to recognize that inviting the participation of women who did grow up with that shite is probably not as easy as shouting, "Door's open! C'mon in!"

By the same token, though, we clueless males (and those women who are currently leading) need a lot of help from emerging evangelical women leaders (who grew up being taught that such a thing could not be) in teaching us how to widen the conversation . We need specific help in specific instances (not just general advice), 'cause if you wait to see if we figure it out, we'll almost certainly futz it up. Then there's not much to do about it but gripe. (The verb I almost used was "bitch". If it were me doing the bitching, I'd have written "bitch". But in this instance I chose a different verb. This is called "cultural sensitivity".) ;-)

I guess in summary, I'm excited and hopeful about the ways the Spirit will move in the Church through the leadership of gifted women. But we shouldn't fool ourselves that we're there already. To facilitate this blessing, we need to help each other, we need to extend each other grace, and we need to try not to piss each other off. In that respect, I hope this post has not been counterproductive. :-D
Posted at 22:51

hey mike, great post. i don't think it's counterproductive at all. just the opposite. i like what you said about recognizing it is much more than just saying "come on in, the door's open!" because the truth is, with all the damage and weirdness over the years it is hard to step into. it will take a lot of intention & valuing of diverse voices and cultivating giftedness & voice. way to go on your "what i really think" series. i think it's been great!