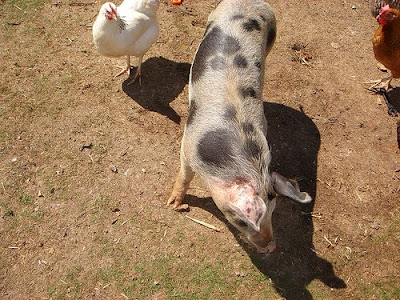 This post is sort of a follow-on to my last one. It's a bit more on the organizational structures that I'm seeing emerge in both my day job and my church world (and how much they have in common), and it also explains why the comic strip at the top of my last post starred a pig and a chicken. In case you were wondering.

One Scrum concept is the idea of "pigs and chickens". The idea comes from this joke:

A pig and a chicken are walking down a road. The chicken looks at the pig and says, "Hey, why don't we open a restaurant?" The pig looks back at the chicken and says, "Good idea, what do you want to call it?" The chicken thinks about it and says, "Why don't we call it 'Ham and Eggs'?" "I don't think so," says the pig, "I'd be committed but you'd only be involved."

I've been reflecting on this in relation to church polity/leadership issues, and have come up with some tentative thoughts.

The first thought has to do with why I'm a dyed-in-the-wool congregationalist. I've long known that I feel strongly that church congregations ought to have very broad freedom in determining just about everything for themselves. One reason why I feel this way is this: the folks in the local congregation are "pigs", when it comes to issues of worship, leadership, ministry, discipleship, mission, etc. for that congregation in particular. Bishops, presbyteries, external trustees, denominational executives - anyone who aren't active members of the congregation - are inevitably chickens. And, well - screw you, alls y'all chickens. Not that I don't want to hear your voice - I do. You're welcome to be "involved". But the reality is you're only involved. The people living this thing every day are (hopefully) committed.

My next thought has to do with one reason I'm not a fan of "lay"/"clergy" distinctions. Take a congregation of 100 people. Let's say three of them are full-time paid clergy, and the rest are lay people. Three people (who happen to be the folks expected to lead this thing) are depending on everybody else for their livelihood, to put food on their family's table, not to mention their sense of vocation. They have a very vested interest in leading the congregation in such a way that ensures said food keeps heading toward said table. As for everybody else - well, they'll keep participating as long as it makes sense to them to do so. Now who's pigs, and who's chickens?

I'm just a big believer in two things, I guess: power to the pigs - and everybody in the barnyard is invited to put their bacon on the table.

Just a few words about self-organizing teams. This is the world I swim in: on my day job (especially singe we've started experimenting with Agile Software Development practices) and on my church life in the "emerging church" milieu.

As this article says, leadership is not obsolete in self-organizing teams! It's different, though, in that leaders are chosen by the team. Probably not democratically, either; instead, it's something more like consensus. Also (and this is key!) the leaders must be held accountable by the team. If they aren't needed in that role (or if they're even harmful to the team), they need to know it, and either adjust their patterns or find a different role. I can't emphasize enough how important that team accountability smackdown is to making this work.

And it's only under certain conditions that such a team dynamic is possible:
I'm crazy-blessed that, in my church and work lives, I'm surrounded by people who are extremely high-"quality" in these ways, and part of cultures that very much meet those other criteria - cultures of humility and empowerment. It's dawning on me that I thrive in an environment like this, and would probably FAIL spectacularly in a different environment.

But just to say: not every culture, context, and environment is suited for Scrum, or for "emerging church". Not yet, anyway. Not until we take over the world. Muhahahahaha! ;-)
Posted at 11:01 2 comments: 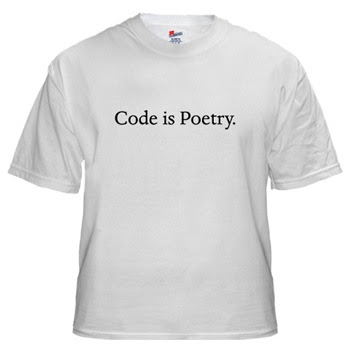 I was just reflecting on the strong commonalities between these two art forms: poetry, and code (i.e., computer programs). (If you don't think code is an art form, either you aren't a coder, or you are a coder and consider "art" to be a somewhat pejorative term.)

Both are, ideally, elegant and powerfully expressive applications of language.

Each form values both beauty (simplicity, elegance, etc.) and "correctness" (i.e., conforming to practical rules), though probably to differing degrees. A poem may perhaps be valuable if it is beautiful, but conforms to no rules. A program, in theory, may be valuable if it's correct, but ugly. I believe both cases are very rare.

Both are, by virtue of the process that creates them, greater than the sum of their parts (i.e., their words and characters). A good program accomplishes some practical task; a good poem evokes some emotional or spiritual response.

And other stuff, too.

That's all I have to say about that, today. :-) Here are some Perl poems, including:

Likely this will fascinate nobody but me. But it fascinates me.

I probably have too many Facebook friends. I've made it a practice to accept friend requests from anybody who "friended" me, unless there was no discernable non-commerce-related reason why they would do so. For the most part, folks whom I don't know who friended me have been one degree of separation away, and part of the "emerging/missional church" conversations in some way shape, or form. It's seemed, well, unfriendly to ignore those friend requests, and so I haven't.

But over time I've gotten more requests from folks who are not just friends of friends, but friends of "friends", if you know what I mean - i.e., two or more degrees of separation away, connected to me only by other folks I don't really know that well, if at all. Still, I've tried to err on the side of "friendly", and it's actually been pretty interesting - seeing, through the status updates of folks I don't really know, what's going on in the Church in a wide variety of contexts. And also seeing frequent updates from chatty folks who rave or rant about things I really just don't need to know about. (Sorry. Luckily, Facebook has ways of regulating that without necessarily un-friending people.)

Anyway, now I have lots of "friends", intersecting with the rather more significant blessing of many real-life friends, many of whom are not, alas, on Facebook. But I'm fascinated with exploring how my Facebook friends relate to each other. Who are they friends with? What do they have in common? How do clusters of friends from different "spheres" of my life intersect? Who are the "bridge" people in my life? The picture afforded by Facebook is very imperfect, what with all the "friends" on FB that I don't really know, and all the dear friends in real life who aren't on FB. And also, lots of people who know each other in real life aren't the Facebook sluts that I am, and haven't necessarily friended one another. But anyway. This fascinates me.

And aiding in my fascination is this cool tool called "Nexus". Here's the link to the interactive version. I think you can access that without being me, my friend, or even a Facebook user, but in case I'm wrong, here's a less-enlightening flat version (click to embiggen): 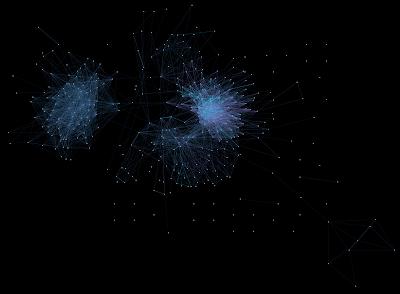 And here's the flat version, annotated to mark out "clusters" of my friends: 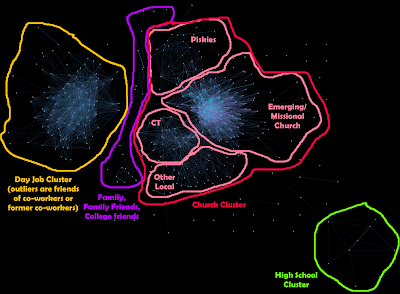 See? I told you I was going to find that a lot more fascinating that you do. But if you use Facebook, you might find it interesting to generate your own graph.
Posted at 11:34 11 comments: 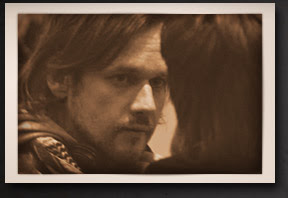 So like most of us us who were there, I think I'm going to be processing this past weekend in Philly for a while. But two of the things I'm chewing on most of all are these two quotes.

The first, from our guest of honor, the inimitable Peter Rollins (roughly paraphrased - who could keep up with the man's words?):

Whenever a circle is drawn defining insiders and outsiders, us and them - the Christian is the one who always steps outside that circle to identify with the outsiders.

(If anyone can improve my remembrance of that idea, please help. There will be a podcast, I think.)

The second quote is from Bob, our gracious host (we crashed at his house), a wise and unbitter escaped pastor:

I keep turning over and over those two ideas. Maybe eventually I'll make something of them.
Posted at 22:05 2 comments:

From Sara at the Cohort blog:

Hey - We will meet at 7pm at the Front Page Resturant on Dupont Circle in Tuesday November 11 to get the low down on the Emergent Mid Atlantic gather that took place over the weekend in Philly. Yours truly was not able to go, but I'm hoping that those of you who did (hint, hint) would be willing to give us and update of what happened, what was said, etc.

That "hint, hint" was partially directed at me, so if you attend, you may get to see me attempt to re-create the experience by imitating a manic, fast-talking, wildly gesticulating Irishman with more mind-bending, life-changing theological brilliance than two continents' worth of tweed-bound systematic theology profs.

On having little to say 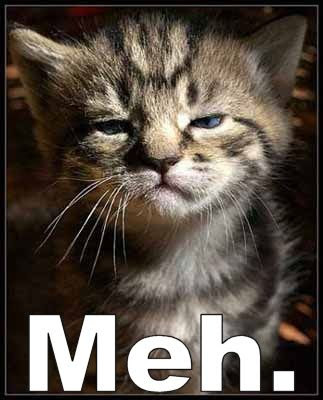 I used to blog a lot. March '08, not so long ago, was a banner month for my blogging output, in fact.

Now I don't blog so much. I was thinking, this morning, about why that might be. I think it's mostly because my thoughts of late - about church, theology, community, culture, etc. - are muchly in a swirl of speculation, and rarely seem to crystallize enough to warrant a blog post. It's been like this:
I think this is good. There's nothing bad about this. I'm learning, and listening, and tentatively experimenting. I've had phases like this before, and I feel like with all the cultural change that's swirling about us, this sort of thing is pretty appropriate right now. If you're paying attention, it becomes clear that "paying attention" is a good game plan these days. Or so it seems to me.

In other news, I switched feed readers. Sayonara, Bloglines - you've served me well. I may come back to you one day, but for now I'm lured by the siren call of Google Reader, with its much superior mobile interface, integration with Blogger, and general feature set.

Also, I'm proud of my country right now. I don't think I have crazy expectations, but it doesn't feel bad to indulge in some smile for this deeply flawed, idealistic human enterprise we call the USA, with its huge potential for good, as well as evil.

From the NoVA Cohort Blog:

"The Emerging Church in [McCain/Obama]-led America"


We are changing locations to hopefully draw a few more people. We will be meeting at: