Wrestling with the Bible study again 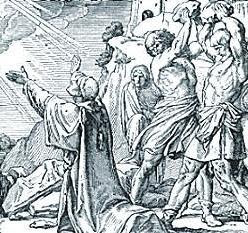 Here's Numbers 15:32-36. I'll give you the version from The Message, so you know it's a more "generous" translation:

32-35 Once, during those wilderness years of the People of Israel, a man was caught gathering wood on the Sabbath. The ones who caught him hauled him before Moses and Aaron and the entire congregation. They put him in custody until it became clear what to do with him. Then God spoke to Moses: "Give the man the death penalty. Yes, kill him, the whole community hurling stones at him outside the camp."

36 So the whole community took him outside the camp and threw stones at him, an execution commanded by God and given through Moses.

So here's the thing. The God I know didn't do this. The God I know in Jesus, the God who was Jesus as described in the Gospels (read Matthew 12, among many other examples) didn't do this. Or, God is crazy. The Trinity is nothing more than a schizoid personality disorder. Or, maybe, God did a lot of growing up in a few hundred years.

Or maybe, just maybe, the person who wrote down this portion of Numbers was just factually mistaken. Maybe Moses thought this command came from God, but he was wrong. Or maybe the truth got lost in the oral tradition between Moses and this story getting written down. I don't know. But honestly, I truly feel this is the only reasonable, honest, authentic conclusion I can come to. And like all conclusions in this life, I recognize that it's provisional. I don't know what the truth of this situation was. I don't know jack. But I have to say that this particular question seems somewhat cut-and-dried for me right now.

I've never believed in Biblical factual inerrancy. I suspect I never will. I do believe that all scripture is God-breathed and profitable for teaching, etc. What that means to me is that even this passage comes to me from God - even if it is, in fact, misrepresenting God. God wants me to learn something from this word. I don't think it's the literal meaning. I don't know what it might be.

OK, I've officially embraced the new version of Blogger. I've tagged all my posts, upgraded my template to take advantage of the nifty new widgets and the new customization user interface (losing and re-creating most of my previous customizations in the process), and did a little extra tinkering to boot. Not much has changed for you, the reader, except a little of the look and feel. (Not all for the better; I had to make some compromises in order to not lose the kewl new stuff.) The "Blog archives" nav on the left is way better than the old one, and the brand-new "Labels" section (also on the left) is there, in case you dig tags/labels as a way to access categorized information.

If you see anything that's really ugly/broken - or you just have any general feedback - let me know. Muchos gracias!
Posted at 00:49 2 comments:

OK, I'm done tagging (aka "labeling") old posts, so those of you who subscribe to this blog's feed in a feed reader can quit cursing me. :-)
Posted at 19:39 1 comment:

Remember that series I was doing on Community? And how I threatened to take things to an uncomfortable place with my next post in the series? And then I seemed to forget about it? (And you probably forgot about it too!) :-) Well, I didn't entirely forget about it, but I did have some hesitation to "go there" to that uncomfortable place. But now I don't need to. Because Webb Kline went there for me. Here's an excerpt:

I have made an incomplete list of some comparisons between the traditional and missional church models as I see them. Hopefully it is complete enough to spell the challenge out for those who are trying to count the cost of making the transition.

Webb is talking in gross generalities to make a point, and describing extremes when the reality is a continuum (again, to make a point), but the things he says in his post are pretty much the things that I was hesitating to say. If you're interested, read his whole post. It's not that long. There are some good comments, too. So...what do you think?
Posted at 21:18 No comments:

OK, check this out.

Play it once or twice, just for the "Google is kewl!" effect. Realize how much data is being visually conveyed into your brain, all at once.

Now, play it again, and watch what happens to the dots that *aren't* dark blue. Look at the red ones, or the light blue ones, or the green or orange or yellow.

Now, play it again, and just watch the dark blue dots. See what happens to those, in contrast to all the other colors. Particularly on the Y axis.

Now think about what that means. Think about the visual story being told there.

How can we freaking sleep at night?

It's gone all hinky. Oh well. We're just out the cost of the home inspection, which was worth every penny. There are other houses.

For those who are interested, but whom we haven't talked to in the last few days: we have a ratified contract to buy the house, as of late Sunday night. Tomorrow (Wednesday) morning is the inspection. We're hoping it turns out that the place is as sound as it appears! I won't ask you to pray for us, because, honestly, I don't think "whether or not Mike and Tina buy this house" is high on God's Kingdom priority list. But, though it's a phrase I seldom use, I think this is an occasion where it would be appropriate to wish us luck. :-)
Posted at 23:25 1 comment:

Wow - this is definitely one of the coolest things to happen in the history of this blog. Here's an e-mail I received recently from Robert Blakesley, a self-described "fledgeling poet" who has created a very lovely poetry "blogazine" called Linekin Bay Review:

Hello Michael
I ran across your intriguing blog "by chance" some months ago. Have only scratched the surface but was really taken by your post of May 7, 2006 on idolatry. It prompted me to organize my thoughts and eventually I wound up writing a poem you might enjoy, copied below. You can find the poem on my blog (http://linekinbay.blogspot.com) along with a number of others.
Best wishes,
~~ Robert
THE GOLDEN CALF

Scientist challenges believer,
believer dooms atheist,
Christian fights with Muslim fights with Jew:
You are so sure you have the truth,
I’m convinced I see the way.
We can’t all be right,
on that only
do we humans agree.

Differences fuel mistrust,
we take up arms.
Deeper down though I at least
yearn to be understood . . . to understand.
Must not we each, somewhere in our being,
be tiring of dissonance,
yearn to know the other,
yearn for resolution
into harmonious counterpoint?

Differing stories, differing models,
differing maps handed down,
have variously illuminated our different paths.
Mythical explanations,
reassuring beliefs, rituals and holy books
once may have been golden reflectors of light,
if not the Light itself.

Now it’s as though we have recast
. . . dare I say it, no one would admit it . . .
our holy books and holy words themselves
into objects of worship,
new versions of the Golden Calf,
as we wait and wander the dry desert . . .
separate, deep down unsure and afraid,
ill at ease with the mystery,
thirsting for the Unknowable.

I admit I'm not someone who reads a lot of poetry, but I really, really like that one. I like what it says, and I like the beauty and rhythm of it, too. As I said to Robert, I find the fact that I may have helped inspire such a beautiful thing unimaginably cool. :-) So, hop on over to Robert's blogazine and check out his other intriguing stuff!
Posted at 20:53 No comments: 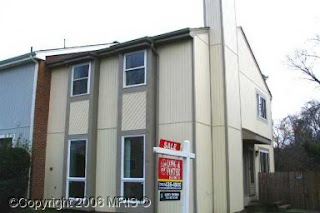 Tina and I put in an offer in a house this afternoon. We are now, officially, attempted first-time home buyers. We affectionately refer to it as "That 70's House". We really like it.