My cousin Cathy's husband John is in the hospital today (as he has been for several weeks now), having his right leg amputated. It's the latest blow in a horrific battle with flesh-eating bacteria. I posted the following note about it to two e-mail lists of my dear faith/church friends:

Sad news on my cousin John

He's going to lose his leg:

Cathy's my first cousin, but I never really knew her and John. Now, in the context of this incredibly hard circumstance, I'm learning that they're people of amazing strength, courage, love, faith, and determination. They'll get through this, and be a strong and active family again, but - so hard. Asleep on the job *again*, God? :-(

(That's a link to Cathy's blog about their ordeal, if you want to read more about it.)

Tina read my message, and said, sadly, "But that's not God's job." And she's right, of course. It's not. God doesn't prevent us from suffering. God didn't prevent His own suffering on Calvary, and God doesn't save us from ours, either, most of the time. That's just obvious.

But we can't but keep on asking, "Why the hell not???" You could, if You wanted to, couldn't You, God? Or, You could have made us so we understand better, couldn't You? Couldn't You have come up with something better than this, You incompetent hack?"

(But answers apparently aren't God's job either, because we almost never get them.)

I'm not really despairing as that might sound. But I think it's a fair question. And if you read the Psalms, it's certainly the sort of question that's got plenty of precedent in our tradition - even Scriptural precedent.

I kind of felt like Tina was saying, "Take it easy on God." And I thought about that. But I don't think that's right. God deserves our worship, praise, and thanksgiving. God deserves our faith, trust, and confidence. God deserves for us to give our whole lives in service to God's mission and dreams. But one thing God doesn't deserve, in my opinion, is our sympathy. This is one f**ked up world, and a lot of that is clearly our fault, but from my admittedly limited perspective, a lot of that would appear to be Your fault. I got nobody else to blame, unless and until You can fix either the world, or me. 'Cause both of those colossal botch jobs are Your handiwork, you f**king hack.

So I'm not sure God deserves our sympathy. Except maybe on Good Friday. And even then, my heart breaks more for the human nature of my brother Jesus than for the Father, who, again, it seems, could have come up with something better.

Sorry, the warning at the top of this blog about rudeness and spicy language isn't usually necessary. But two posts in a row, it has been. Maybe I have some anger management issues to work on this Lent.

So, the Primates (that means "Archbishops who lead national churches" - keep the ape jokes to yourselves, you unwashed non-Anglican philistines) of the Anglican Communion have issued a communique which, among other things, lays out the way forward if the US Episcopal Church is to maintain its standing as a full member of the Communion. You can read all about it here.

As you may know, I'm a fairly outspoken supporter of gay rights, including within the church. I think the Biblical case for the sinfulness of homosexuality is insufficient to justify treating gay Christians, including those in committed gay sexual relationships, any different than straight Christians, including blessing unions and opening up leadership positions. I don't think it's a sin, but even if it is - you show me a straight Christian who's free of unrepented sin, and I'll show you a big, fat liar. And although the weight of Christian tradition on this topic troubles me, I am convinced that that tradition is as dead wrong on this subject as it was on slavery, before William Wilberforce and others like him began to turn that tradition around.

All that is by way of saying: I agree, on one very important level, with the actions of the Episcopal Church on this issue. I would love to see the acceptance of gay folks expanded within the Church, as TEC has tried to do. On the other hand, it's crystal clear to me that these actions are incompatible with the desire to remain a part of the same organizational hierarchy with a much larger, worldwide Communion, the vast majority of which is currently deeply opposed to this kind of change. So, at this point, my guess would be that TEC is not going to be able, in good conscience, to comply with all of the stipulations of this communique. Which will lead to major changes in TEC's relationship with the worldwide Communion.

But, honestly, that's not what I wanted to blog about. I can't claim to care whether the organizational ties between these bodies remain, or not. I don't think Jesus gives a sh*t either. Just my personal opinion.

What I do think Jesus gives a sh*t about ('cause he said so, in John 13:34-35, among other places) is that Christians love each other. Let me just quote those verses again:

OK, first of all, this is not a recommendation. It's a command. Says so, right there in v. 34. Secondly, it's not just a command that we love each other, it's a command that we act like it. Did you catch that bit in v. 35, about "By this everyone will know that you are my disciples"? This is not just a "C'mon, guys and gals, you'll be happier if you all just get along." This command is not given for our sake, or for God's sake, or for Christ's sake (for Christ's sake!). It's about the damn mission, people! If we can't love each other, and act like it, then who in their right mind would want to be one of us?

So, on that note, I was glad to see that this bit was part of the communique:

I've hesitated to say anything about this before, because I have dear friends who support the Diocese of Virginia's actions regarding the church buildings associated with the Falls Church, Truro Church, and other Virginia churches which have chosen to break away from the Episcopal Church. I've hesitated, but now I'm gonna say it, because the Primates said it first:

Back the f**k off, will you please? First and foremost, as Christians, we are called to love each other, and act like it. And Christians don't sue their brothers and sisters over stupid damn buildings!

That's all. Sorry if I hurt anybody. But that's how I feel.

UPDATE: I didn't mean to imply that I only applaud the clauses in the "On Property Disputes" section that are directed toward TEC. There's also this:

We also urge both parties to give assurances that no steps will be taken to alienate property from The Episcopal Church without its consent.

To the people of Truro, the Falls Church, etc.: y'all need to back the f**k off too. Those buildings you're using belong to the Episcopal Church. Like I said, I believe that TEC, in love and grace, ought to refrain from legal action or other aggression in order to kick you out, but honestly, if you believe you're answering a genuine call from God (and I'm not disputing that), then why not follow that call into a rented office space or a school gym or something? Do you really think God wants you to squat on your brothers' and sisters' property without their consent? For how long?

My point is: find a way to work this out like Christians. Maybe TEC should sell the buildings to the congregations. I'm not sure what they think they would do with them if they kept them. I don't know what amicable solution might exist, but find one. Or, like the Primates said, sit on it until you can.
Posted at 00:12 2 comments: 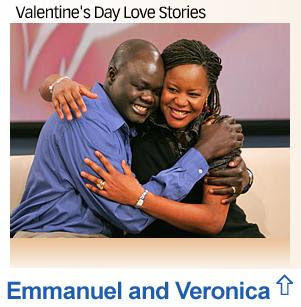 Emmanuel Chan, a friend of my good friend Israel, is going to be on Oprah tomorrow. He and his wife Veronica (a former Sudanese "lost boy" and "lost girl") have an amazing story of loss, pain, separation, triumph, and (most of all) love, and it's still ongoing. Check it out!
Posted at 23:04 No comments:

Tomorrow, in our Sunday morning worship service, my Christian community is going to pray together for healing. Divine, supernatural healing of 100% real ailments, physical or otherwise. If you've been following the history of our church at all over the past year or so, you might realize what an incredibly audacious thing this is for us, in this community, to do. Can we really believe in the power of God to heal? If God has that power, why the F**K does God withhold that power? Does God's healing depend on our belief? If not, then on what does it depend?

Fine, Israel. I'll post my ratza-fratzin' PersonalDNA results on my blog. Now the whole world can know that I'm only 2% masculine. :-P

but Mike! you didn't link to your PERSONAL results... just to the page for your personality!

Right. Fine. I didn't notice that, but for the record, here are my complete, uncensored results. Are you happy now? ;-)
Posted at 17:50 1 comment: