Requiem for the American Dream 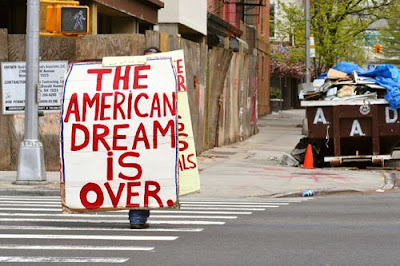 This post from Len Hjalmarson is so interesting, I'm just going to steal it in its entirety.

“For years, Americans have reveled in profligate, load-up-the-back- of-the-SUV-at-Target excess, much of it paid for by credit cards, home equity or other loans. The binge has produced some supposedly healthy economic growth and provided everyone lots of nice stuff. But now debt collectors from around the world are knocking. That’s why today’s turmoil in U.S. financial markets will end in a massive transfer of wealth from America to the rest of the globe.”

Housing the homeless could save millions.

VANCOUVER — A study says providing shelter for the homeless with severe addictions and mental illness throughout British Columbia could save taxpayers millions of dollars.

“Addiction is the most prevalent mental health problem in both the street homeless and at-risk populations, followed by concurrent disorders and, less frequently, mental illness alone,” says the Simon Fraser University report.

The paper - entitled “Housing and Support for Adults With Severe Addictions and/or Mental Illnesses in British Columbia” - says providing non-housing services for such people costs the public system more than $55,000 per year per person.

It says providing adequate housing and supports could reduce this cost to $37,000 per year.”

The American dream seems to have taken an ugly turn.

Good point in your post, Montag. That whole "pull yourself up by your bootstraps" thing always seems to be in the past for "us" - something our grandparents or our parents did, or possibly that we did in the past - but for "us" today, that's no longer necessary. We've got credit cards now, and lawyers, and lobbyists. We've *done* the bootstraps thing, and now we're entitled to something for nothing. But as for "them" - recent immigrants, folks who have fallen on hard times, etc. - bootstraps, baby. Chop chop. Look what it did for us.

I never got the whole "pull yourself up by your own bootstraps" thing. I mean, elementary physics shows that this idea is patently absurd! The upward force you exert on your bootstraps will always be balanced by the downward force of your feet pressing on the ground to get leverage. The free-body diagram will show zero net force upwards. However, if you sort of did a little hop and while your feet are briefly off the ground you yanked the bejeezus out of your bootstraps, you might be able to exert enough force to flip yourself over so you crack your head on the pavement.

Hm. Maybe the metaphor is relatively accurate after all.