What I Really Think: #5 - Homosexuality and the Church 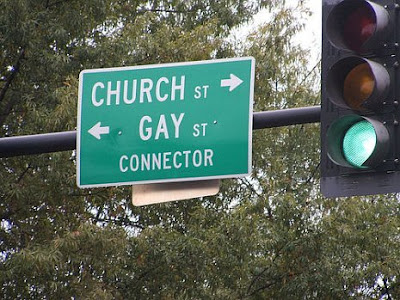 I'll try to keep this one brief too. I'm not a Biblical literalist. That said, many sincere Christians find in the Bible a clear basis for concluding that gay sex is sinful - and I'm willing to concede that they could be right. I don't think that's a crystal clear conclusion based on the evidence of Scripture, but I can understand why sincere Christians come to that conclusion. Why don't I think it's clear? Well, here's some of my thinking on using scripture to decide this sort of thing:
What can we conclude about moral prescriptions from a careful study of facts like these? Not bloody much, if you ask me. Life is more complicated than easy moral prescriptions, the Bible is not a rule book, and (as my friend Tim recently reminded me), proof-texting is for weenies. So I don't know for sure if God disapproves of gay sex. It's possible. But I don't think so. I know I go against the tide of 2000 years of church tradition (and Jewish tradition before that), but for most of that time those dudes thought slavery was A-OK too. Bible doesn't really say otherwise. I happen to think they were wrong, though.

But let's say, for the sake of argument, that gay sex is, indeed, sinful. And let's say, too, that we agree (for the sake of argument) that the Bible is a good place to find out what's sinful and what's OK with God. I'm now standing, rhetorically, on roughly the same ground as a lot of people who then conclude that openly gay folks, in loving relationships, must be excluded from church leadership.

In my opinion, that's crap. Please refer back to the bulleted list above. Even conceding the point that gay sex might be sinful, I personally refuse to condone excluding gay folks from church leadership until such time as we are prepared to also exclude fat people. And rich people. (Want to know if you're rich? Click here.) And since that keeps me out of church leadership on two counts, I guess then I'll shut the hell up. But until then, I'll share the following not-so-humble offer with anyone who thinks that the handful of Biblical references to the sinfulness of gay sex is sufficient ground to slam doors in the faces of gay followers of Jesus: you show me a church leader who's free of unrepented sin, and I'll show you a big, fat liar.

The church is made of up, and led by, broken sinners. Broken sinners who are trying to follow where Jesus leads us, together. That's who God calls, 'cause there ain't anybody else to choose from. Excluding gay folks from church because of their "sin" is, in my opinion, a radical betrayal of this reality and of Jesus' example of welcoming all to his table - especially "sinners". I think Jesus calls us to that same radical welcome.

Sin is real, but it's up to God to judge and the Spirit to convict us and work change in our hearts. If you feel convicted to share with your gay brother or sister your concern over what you see as their sin, then I'm not going to tell you that's wrong. But I hope you're as ready to talk to me about the error of my gluttony and greed. We all need accountability from our fellow believers, and we all need their radical welcome too. And we really, really need to get over ourselves and realize that we're all - gay, straight, or otherwise - in the same boat.
Posted at 23:49

Beautiful post. When you really get down to it, you're pretty good.

Interesting note about references to homosexuality in the New Testament: I heard recently someone explain that these are really references to pederasty. Quite a different thing.

Good post! I also think there is an underlying question here that should be addressed: What is Sin? Can actions be equated to "sins?" If Sin is a state of being, of separation from God, then speaking of particular actions (as the church so often does) seems to miss the point?

I personally would go a step farther with regards to homosexuality. I have no problem condemning slavery, in spite of the fact that the Bible clearly seems to allow for the practice. I also have no problem accepting homosexuality, even though the Bible seems to clearly critique such behavior. I am all about the state of one's heart. I personally think it is obvious that one can love and be transformed by God, while having sex with someone of the same gender.

@Ken: Like...both at the exact same time? 'Cause I have to admit (and I'm just speaking for myself here) that while I'm having sex, I have a hard time thinking about God, or indeed about anything el...

I think that is the key to why this issue bothers me so, why on earth can anyone consider themselves 'better' in any way than others when clearly well all need God's saving Grace!

great job again...and where did you get that prophetic picture??

I'm new to reading your blog and this entry makes so much sense to me. My bro is gay and we were raised in an awesome loving, Christian home. I have always struggled with this issue since I love my brother so much and he also loves God so much. I have alot to think about now...thanks again!

Thanks, Judith! Glad I could be food for thought.