I am the happiest dude in the fricking universe 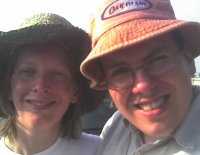 I got some totally awesome news today - Tina's coming off the trail, and she seems to be totally at peace with it. It's just become monotony, and she's lonely, but she doesn't feel defeated by it, because she's hiked through a bunch of bad stuff - her pack injuring her shoulder and hip, a sinus infection, our dog dying - and kept on going. It's been going well for a while, but she's decided that she just doesn't like hiking alone week after week after week, and she doesn't want to do it any more. So she's coming home!

This wasn't an outcome I even allowed myself to pray for, much less hint to Tina how much I miss her. I truly did and do want her to do what she needs to do, and to get from this what she needs. But now that she's made the decision, and she seems completely cool with it,

Great post from Scot McKnight (quoting Eddie Gibbs and Ryan Bolger) about the shape of evanglization in the church that is emerging. Check it out.
Posted at 10:38 No comments:

Good, strong, challenging stuff from Bartimaeus, who reviews George Barna's latest research and finds Americans' lack of commitment disturbing. Read all the way through to the words from Jesus at the end.

Loving God, grant us the courage and the grace, the hubris and the humility, to do just that. Amen.
Posted at 15:02 No comments:

The title of this post is also the title of the delightful Hayao Miyazaki anime film I'm watching this evening, despite the fact that I sort of have the evening off, and I really feel like I should have been doing some real meaty theological writing instead. It's been quite some time since there's been any sign of anything remotely approaching theology on this blog, let alone rudeness. I was doing pretty poorly keeping up with the blog last month, with work going crazy, and that was before my life turned into a bad country and western song: my wife left, my dog died. :-| Yes, thanks for asking, I would enjoy some cheese with my whine. Well, anyway, I am sitting in an armchair. One out of three ain't bad. ;-)

There is some stuff stewing, as I mentioned in the last post: then next CCotC installment, and the one on "leadership and technique" that's about three weeks stale now. I'm heading off now for a three-day retreat, so you won't see them right away. Maybe Sunday evening. Maybe not. God's peace, everybody!
Posted at 14:51 1 comment:

This morning, to celebrate God's great "YES!" to Jesus in the miracle of the empty tomb, I pulled a move that demonstrated the emptiness of my head. I caused needless worry for some dear friends, as well as some confusion for a wider range of friends. And at the time, I was too clueless to even realize the distress I was causing. Later, after a clue was forced through my thick skull, I felt pretty awful, but the friends who were hurt by my actions were amazingly gracious, and modeled God's forgiving love in a way that moved me deeply. (A bunch of us also got to make a connection with some new friends, which was what I had set out to do in the first place, and despite the confusion that was also an occasion for grace.)

In related news, the guy who is known to a great many family and friends as Mr. Church Guy didn't actually make it to a worship service on Easter Sunday. But I had an experience of the unexpected, undeserved, life-restoring grace of God that will make this Easter one I'll remember for a very long time.
Posted at 22:20 2 comments:

Time for a rerun: The Freakin' Hilarious Dog Wranging Story

OK, I have a couple of blog posts coming that have been incubating for a while as my life has been driving over bumpy roads for a bit: the next CCotC installment, and one on "Leadership and Technique", in which I will make a lame attempt to synthesize recent observations from both of my churches.

Those will probably surface some time this holy weekend. In the mean time, in honor of my dearly departed snow dog, I'd like you to travel with me back in time - to a blog post from three years ago, when both this blog and Blade's membership in our family were very new and unfamiliar things. It features our two bunnies (Ziggy, who has since passed on, and Teresa, who still hops around the room in the basement mentioned at the end) and three dogs: our beloved Blade, our sweet girl Machig, and our Temporary Foster Scaredy-Dog, Max. (For brief background on Max, read this post first.)

So, without further ado, The Freakin' Hilarious Dog Wranging Story. (Note: Parental guidance is suggested due to some naughty language.)
Posted at 22:16 No comments:

I've been a little distracted of late, but I really need to blog about this: a Washington, DC Emergent Cohort is forming! First gathering is Thursday, 27 April at 7 PM at Guapos Restaurant in Tenleytown. Y'all come!
Posted at 11:19 No comments: 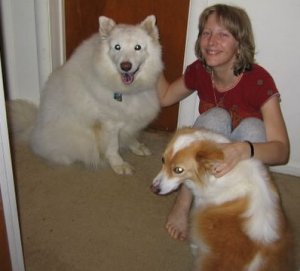 Our cuddly, fluffy, cheerful, stubborn, faithful, love-demanding, lovable, uber-omnivorous snow dog has gone home to his Creator. We already miss him so much.

Thank you so much to Liz, Kate, Maggie and Schuyler for bringing your wonderful kids over yesterday to play with him. I can't imagine a better day for him than yesterday. After everybody left, we went for a nice walk, and this morning was so beautiful - he got to lay out on the lawn in the sun and smell the grass, even though he could barely lift his head off the ground. Our vet has been wonderful through this - compassionate and gentle. It was so hard to say goodbye to our sweet boy, but he lived his last days as he did the last three years that he's been with us - smiling and loved.

Well, my puppy's home. He's doing OK, all things considered. However, realistically, barring a miracle he's only got a few weeks to live. The ultrasound revealed that he does indeed have tumors on both his spleen and his liver, and they're probably multiplying, so although he's getting better, this will happen again. Surgery would maybe add a month or so to his life, if all went well. And, due to his bad arthritis, recovery from surgery would be very painful for him. So far, he hasn't really been suffering (except from the arthritis, which he's been living with for years), and I really want to keep it that way.

So we're not going to do that (surgery). When Tina calls tomorrow, I'll find out if she wants to come temporarily off the trail to say goodbye. If so, I'll do what I can to make sure he's here when she gets here (assuming that doesn't involve him being in pain), but beyond that, next time he gets really sick, I'll probably say goodbye too. We'll miss our cuddly snow dog, and I'm incredibly thankful to have a little more time with him after all.
Posted at 13:33 2 comments:

After actually getting a chance to examine Blade and do an x-ray, our doc says if it were his dog, he wouldn’t even open him up for surgery, much less euthanize him. :-) !!! The abdominal bleeding seems to have healed since yesterday, his red blood cell percentage is back up to 27% from 21%, and the x-ray didn’t reveal anything conclusive. He’s very arthritic, he’s lost weight (which is troubling), and he almost certainly does have at least one tumor, but at this point he should just come home and take it easy. I authorized the doc to do some bloodwork and an ultrasound to try to get more info, but I’m taking him home at 12:20!

It’s likely that there’s stuff going on in his belly that’s going to kill him sooner or later – but not today!
Posted at 10:23 1 comment:

So Tina and I are both feeling pretty lonely right now. This is because in all likelihood, tomorrow morning our family will become a lot smaller. And we're both wishing Tina were here right now.

Our doggy, Blade, a roughly 13-year-old Samoyed whom we adopted from a rescue organization three years ago (after his family gave him up after 10 years because they apparently could no longer deal with his beautiful, long white fur all over their furniture), and with whom we've had many walks and adventures and cuddles and disagreements over food ownership, is probably not going to be with us after tomorrow morning. He was OK last night, but when I woke up this morning he couldn't stand up. I took him to the emergency vet with the help of my friend Jessica (thank you soooo much, Jessica!!) and they did some tests, and it turns out he's bleeding internally due to at least one tumor on his spleen. (He's so weak due to low red blood cell count.) I'm going to take him in first thing tomorrow morning to our regular vet, and they'll prepare him for surgery to remove his spleen. As part of preparations, they'll do an x-ray, and find out if (as is somewhat probable) the cancer has already spread, in which case there's really no point in surgery, and we'll probably put him to sleep. Thank God Tina was in phone contact today, and she's camping out tonight near town so she can be in contact tomorrow morning when we'll need to make decisions. But like I said, we're both feeling pretty lonely tonight.

I have to go hug my doggy. Thankfully, he's not in pain, or at least not much, just very weak. He's eating and drinking, and I gave him some junk food he likes today because, hey, what the hell.

It's hard to feel completely lonely when surrounded by two dogs, three cats, two ferrets, and a bunny, but the house seems awfully empty right now. I keep finding socks, though, which continues to bring a smile to my face. (Tina is famous for leaving her socks anywhere and everywhere, so before she left she hid socks everywhere in the house. Everywhere - the medicine cabinet in the bathroom, the box of Boca Burgers in the freezer, the ferret food bin. I keep finding them, like Easter eggs, and I won't be surprised if some remain unfound when she returns in six months.)

I've learned an awful lot of things this weekend, from a variety of sources. It's been a real learning weekend. Some of the church-related things I'll blog on later, but I'll just mention one thing I learned here: shaving my head is harder than Tina made it seem.

I know a lot of you are praying for Tina and me. It's deeply appreciated.
Posted at 22:03 6 comments: