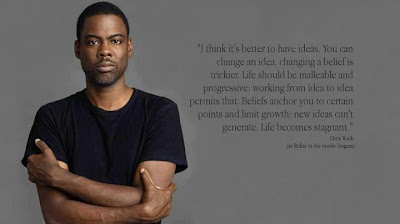 In case you can't read the image above, it's a quote from Chris Rock's character Rufus the Apostle from the movie Dogma.  Says Rufus: "I think it’s better to have ideas. You can change an idea; changing a belief is trickier. Life should be malleable and progressive; working from idea to idea permits that. Beliefs anchor you to certain points and limit growth; new ideas can’t generate. Life becomes stagnant."

I think Rufus is right on.  I've been thinking about it a lot lately, and I really want to work hard to not have beliefs.  This might sound strange from someone who identifies fiercely with the Christian Church - and it may well sound strange to some of my friends within the Church.  But upon much reflection, I really just don't think that "beliefs" are a very good idea.  I'm trying to do my darnedest to avoid them.

So, for example, I'm not interested in saying, "I believe there is no god", as an atheist would (though I will have to confess a lack of belief in any concretely-imagined concept of a divine being).  But nor am I interested in saying, "I believe God is One in Three" (though I find very rich and helpful symbolism in Trinitarian thought) or "I believe that Jesus of Nazareth was the Son of God" (though I remain a devoted disciple of Jesus as the ultimate - for me - image of Love in human form).

So you're probably saying - well, it sure sounds like you have beliefs.  And maybe I (along with Rufus) am just arguing semantics.  But to me, "belief" means something like "coming to a conclusion about something for which there is insufficient evidence to decide".  That just seems unwise to me.  So instead, I try to have other things instead.

I have conclusions based on scientific evidence.  Due to the nature of science, these are of course provisional.

I have opinions.  I support marriage equality (even though I think that "marriage" as we know it is a hot Constantinian mess) and I think the indefinite detention provisions of the 2012 NDAA are a horrific idea.  For example.

I have heuristics.  Rules of thumb.  Things that I think work well a lot of the time.  The Sermon on the Mount, for example, is full of those.  I'm a fan.

I have hunches.  For example, I have a hunch about the thing that happens when groups intentionally seeking discernment have moments of clarity that lead them to helpful and healing action - which Christians often attribute to the Holy Spirit.  I have a hunch that that's a real thing.  Perhaps "Jungian collective unconsciousness" or "adaptive social sensitivity" or something is a better interpretive construct for that sort of thing than "the Holy Spirit".  I'm not super-concerned about interpretive constructs.  I think that for many phenomena that we don't understand very well, there's a wide variety of interpretive constructs/images/symbols that might be productively used to talk about them.  I think when we latch on to those constructs and make them "beliefs", they can (but don't necessarily) become harmful.

(Another example might be mental illness.  As someone who suffers from bipolar disorder, I actually think that the ancient interpretation of some forms of mental illness as "demon possession" was not as ridiculous as it may seem.  That's a pretty apt image for what it's like sometimes.  But when you take that too seriously - and morally judge someone for "dealing with demons" - or prescribe exorcism instead of psychiatry - then it becomes harmful.)

I have hopes.  For example, I have a hunch that there's no continuity of consciousness that survives death.  But I have a hope that I'm wrong.  I also have a hope that the human race's future might be characterized by lots more love and grace (what Jesus referred to as the Kingdom of God), rather than by various forms of human-made apocalypse.  I don't expect God to just take care of that for us while we sit back and keep screwing things up...nor do I believe that the "myth of progress" will inexorably march us to that outcome.  Yet I persist in this hope.

All these things, I have.  All these things are provisional.  My dear friend Deanna once described belief as a "stake in the sand" - something you put down in order to function in the world, but could pull up easily when appropriate.  Something provisional, in other words - like Rufus's "ideas".

I suppose many of my "other things" described above could be called "beliefs" in this sense.  Maybe I am just quibbling about language.  So be it.  But I guess "belief" is just not a word I'm finding very helpful right now.

*The above image is credited to The Interwebs.  I don't know who made it, and since they amusingly credit it to Chris Rock a line that was written by Kevin Smith, I'm not too concerned about the image creator chasing after me for lack of attribution.
Posted at 18:36 37 comments:

A short thought about maturity 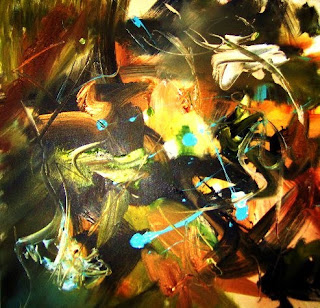 This is a thought I had, following Wild Goose Festival (East) 2012 and my experience there both with friends, and reflecting upon a number of talks which touched on recovery from traumatic experiences:

It's a rare and precious thing to be capable of coming alongside someone as a friend without needing to explain them to yourself - that is, to offer your presence while allowing your friend to maintain their own mysterious integrity, free from your need to fit them - and their thoughts, actions, motivations, joys, passions, and sufferings - into categories that make sense to you and make you feel comfortable. I hope to grow in this capability.

I posted this in an online group, and my friend Janine responded with the following:

I'm with you, Mike, hoping to grow in this capability too! Perhaps non-dualistic thinking is the basis for being able to grow in this way. Seems to fit with Richard Rohr's Daily Meditation for today:

"Reality is paradoxical and complementary. Non-dual thinking is the highest level of consciousness. Divine union, not private perfection, is the goal of all religion (GOAL).

"Reality is “not totally one,” but it is “not totally two,” either! All things, events, persons, and institutions, if looked at contemplatively (non-egocentrically), reveal contradictions, create dilemmas, and have their own shadow side. Wisdom knows how to hold and to grow from this creative tension; ego does not. Our ego splits reality into parts that it can manage, but then pays a big price in regard to actual truth or understanding.

"The contemplative mind will be at the heart and center of all teaching in our new Living School. Only the contemplative mind can honor the underlying unity (“not two”) of things, while also work with them in their distinctness (“not totally one”). The world almost always presents itself as a paradox, a contradiction, or a problem—like our themes of “action and contemplation,” “Christian and non-Christian,” or “male and female” first did. At the mature level, however, we learn to see all things in terms of unitive consciousness, while still respecting, protecting, and working with the very real differences. This is the great—perhaps the greatest—art form. It is the supreme task of all religion."

I have to admit that I was surprised and a little proud to be tracking so closely with thoughts from Fr. Richard, whom I admire very much.