So here I am, minding my own business, and Gallycat tags me with a meme. What did I ever do to deserve this? ;-)

Honestly, this seems like a pretty lame and generic meme, but it also seems to be sweeping the blogosphere, so who am I to argue with a force of nature?

First, the rules. Then, the meme.

1. Each player starts with eight random facts/habits about themselves.

2. People who are tagged need to write their own blog about their eight things and post these rules.

3. At the end of your blog, you need to choose eight people to get tagged and list their names.

4. Don’t forget to leave them a comment telling them they’re tagged, and to read your blog.

So here's my randumb facts:
I guess those facts weren't exactly random. There was something of a theme to my meme. Oh well - sue me. 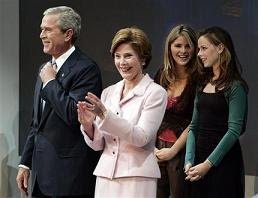 Of all the rude things I've ever put on this rude blog, I suspect the title of this post might be the most offensive to some of my throngs ;-) of readers.

But it's true - I do have a certain measure of respect for our commander-in-chief. Now, don't get me wrong - I wouldn't vote for him to be the facilitator of a yearbook committee, much less any public office. I would probably disqualify him right off the bat due to the extreme black-and-white, nuance-free way he seems to view much of the world, but add in the fact that he and I disagree strongly on a whole lot of major issues - war and peace, the environment, poverty issues, you name it - and I ought to be clear that I'm not exactly a bush supporter. And it's not even hard for me to come up with a list of white, male, powerful, conservative Republican politicians that I respect more than GWB: Bob Dole, John McCain, Bush's dad.

But I do respect Bush, and the reason that I respect him is that as far as I can tell, he's not, primarily, a mere political animal. He's a man of conviction, who frequently acts according to what he genuinely believes to be the right thing, despite the political consequences. You can see this in things on which I strongly disagree with him, such as Middle East / war policy or global warming (though he may be coming around on that a little), but I also see it in areas where he and I are much more in agreement (immigration reform) or where I am ambivalent (stem-cell research). I may not be happy with the thinking behind his convictions - I may think them shallow, simplistic, or just horribly wrong - but I generally have to say that my impression is that his convictions are heartfelt, and that he tends to act on them - not just according to the political winds.

So in the case of immigration reform, it seems to me that his years in Texas spending time around immigrants - legal and otherwise - has led him to an understanding of the realities of the situation that is informed by both experience and compassion, and that he is determined to support a right course, as he sees it - his conservative "kick 'em all out" base be damned.

And in the case of stem cell research, it is my impression is that he is acting out of genuine moral concern that we not go somersaulting down the slippery slope toward the mass production of human embryos for medical purposes. Honestly, I'm not sure where I'd draw the line on this stuff, but I respect his desire to be cautious in this area, despite the tide of public opinion and political pressure from all directions.

I'm not saying Bush is a good leader, or what our country needs. I don't think either of those are true. All I'm saying is that I must admit that I think he's remarkably authentic for a politician - a man of convictions in a town full of professional sellouts. So while I have never been a Bush supporter, and likely never will be, I also try to avoid making him the butt of jokes. My best hope for Bush is that his relative success as a President might inspire someone whose convictions I actually agree with to stand their guns in Washington and lead strongly and authentically.

Another reminder (or very possibly, new information!): we're doing the next gathering of the little community called "mesh" at my (new) house in Herndon this coming Thursday evening, the 14th. We'll be noshing, quaffing, and socializing a bit starting at 7pm, and then watching the movie Jesus Camp and discussing it starting at 7:30. You are most welcome!

More info is on the official "mesh" blog; please don't hesitate to email me if you need directions or more info or to arrange a ride or something.
Posted at 09:35 2 comments:

June 11th will bring us Wes White, an American theologican who lives in Glasgow, Scotland and is spearheading the TREK (Theological Resoursing for an Emerging Kultur) across Europe. We are grateful that Wes was able to stay an extra day on his journey across the pond to spend an evening with us. TREK springs from the concept of sharing around the local table and in healthy mission.

White writes, "TREK is premised on the conviction that there is good and bad theology, and that the distance between the two is best measured by mission. Furthermore, we, the TREK Team, beleive that good theology includes facts (history, geography, personages, events, ect.) , but so much more. Healthy theology fancies the narrative, the nuance, the give and take, the mystery, the passion, and the imagination. In short, it personifies the freedom that inheres in God himself who is relationship in community (trinity) and who, in love (1John 4:8) invites the whole of creation into the ever expanding community of himself (mission)".

Please join us for a lively conversation this night.

More information about TREK can be found here http://www.localtable.org

on the 2nd Monday of the month in the back room at 7pm.

I'm planning on going, so if you want to Metro in together, let me know.
Posted at 09:27 No comments: 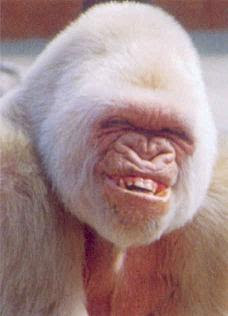 All's not right in the world - the world, my world, the world(s) of those I love, whatever. Never gonna happen, I think, in this world. It's not that sort of place.

But much is right, and a great deal is good - very good. And I am richly blessed.

So thanks. Thanks, God - and thanks, all you accomplices, aiders, and abetters to the good stuff God's doing in all of our lives.
Posted at 23:19 No comments:

Yay. I have internet at home again. Verizon finally installed FiOS at my house today. It works, and it's fast. Me like. Me happy.

I promise, I aspire to blogging about something that somebody else might actually find interesting once again. One day. :-)

In the mean time,

Issue five came out yesterday. Yum.
Posted at 23:22 No comments: