What I Really Think: #3 - Church Hierarchies 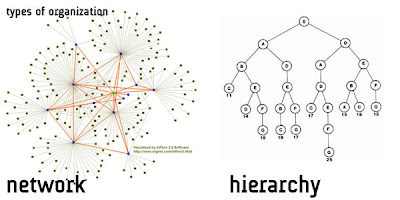 This post will follow, in some ways, on the last post about pastors, which generated some great discussion. Thanks for that! OK, here we go: church hierarchies.

People talk a lot about a cultural shift from the "modern" to the "postmodern". I think this is a real thing - I've observed lots of evidence in the lives and behaviors of myself and folks I know that is consistent with much of what's been written about this shift. Lots of different characteristics have been mentioned as part of this, including a re-emphasis on the community (not just the individual), intuition (not just reason), spirit (not just matter), the organic (not just the mechanistic), common ground (not just left/right and other traditional divisions), etc. Also, significantly, a skepticism toward modernistic dualism which renders all the dichotomies I just listed rather beside the point, as well as a humility regarding our ability to know, understand, and control as much as we used to think we could, and a bold willingness to deconstruct what we used to think we simply knew.

I resonate with all of that stuff, but I also note that much of it isn't really anything new. It's stuff that hasn't been at the forefront of Western culture for a few hundred years, and it's great to welcome it back. But much of the "postmodern" seems to me to be a re-appreciation of pre-modern facets of our culture, and a synthesis of those with the undeniable benefits of modern-age innovations (rational philosophy, the scientific method, individual human value, etc.). This is all great stuff - no doubt! - but it's not entirely new.

But I'll tell you something that is entirely new. It's this little thing right here:

Dude. I'm serious. This changes everything.

It doesn't just change the way we organize information on the internet. It changes the way we think. It didn't start with the Web, of course - toward the end of the modern age, a whole bunch of new inventions started changing the way people think about relationships. The telegraph, the telephone, air travel, the internet, cell phones: all of these have conspired to make (relatively) easy what was once damn near impossible: to create and maintain human relationships across boundaries. Time was, hierarchical organizations (governments, businesses, denominations, parishes) and the boundaries they naturally create were just how humans organized themselves. At least in Western culture, as far as I know, this has pretty much always been the case.

Within the Church, most of us were sorted and categorized by our position within denominational hierarchies: denomination, province, judicatory, synod, archdiocese, presbytery, diocese, parish, etc. These hierarchies (like the parallel ones in business and government) provided the infrastructure for relationships - relationships within the parish were facilitated by the pastor; relationships between pastors in different towns (if such existed) were facilitated by the bishop or the presbytery or the like; and so on. Accountability, generally speaking, flowed down from above, as did spiritual support. It still works this way in much of the Church, of course.

But let's think for a moment about a parallel to the organization of church polity: the organization of information. The world of denominational hierarchies is like a brick-and-mortar library. Every book has a place, and is near other books that are similarly shelved. But a book can't be shelved simultaneously in "do-it-yourself" and "animal husbandry", even though it's about how to make useful devices for facilitating livestock breeding. And a paper book on horse breeding can't link directly to another book on equine anatomy and physiology.

On the Web, of course, it's completely different. You don't have to pick one category. With tags and search engines and complex webs of links, information can be found in whatever collection of categories make sense. Further, you can link to anything. You don't need permission - you don't even need help. It's easy.

In my opinion, the church that is emerging - the church that will be most welcoming to postmodern people - is like the Web. Folks know, today, that you don't need to pick one category. They know that relationships and friendships and partnerships can easily cross denominational boundaries, and that these boundary-ignoring relationships can just as easily become far more important than the boundary-defined ones within the denomination. They know that there's really no need for someone above them in a hierarchy to provide accountability and support, because they can get both of those from their horizontal networks of friends across the breadth of the Body.

A friend of mine (not mentioning any names, but Tim knows who he is) identifies this with American individualism, but I disagree. Rugged individualism was a big part of American culture long before anybody was really trying non-hierarchical networks of human organization, and those of us who prefer horizontal peer networks are (in my experience) really not trying to avoid community or accountability. To the contrary, community is hugely important to us, as is accountability - we just don't feel comfortable entrusting our accountability to one person (our "boss" in a hierarchy) who is not similarly accountable to us. We'd rather have a network of peers charged with our accountability - and we with theirs.

This is not to say that I think denominations are obsolete. I don't think libraries are obsolete. (I have friends who would kill me if I thought otherwise!) But I would note that when the Web came along, libraries didn't ignore it, nor did they allow access to it only via the Dewey Decimal System. Instead, just about every library these days has become a portal to the Web, allowing visitors to access it freely. They actually became a wonderful gift to a great many folks who might not otherwise have a way to access to wealth of information on the Web.

So I do think that, to the extent that denominational hierarchies attempt to exercise control over emerging expressions of faith, or ignore those expressions, they are, if you'll pardon the expression, pissing into the wind. And the control thing is a big problem, because "control" - maintaining some kind of uniformity - is one of the major reasons that such hierarchies exist. If these attempts at control were ever helpful, I think their utility is at an end. Can you look at the state of the Church today, and tell me that all the hierarchical control in the world has been effective in ensuring orthodoxy, or promoting the unity of the Body, or preventing people from doing whatever the hell they feel God (or their own desires) is calling them to? Control is the business of Caesar, and Pilate, and Constantine, but it was never the business of Jesus. Vertical control structures might have been necessary once (I'm not sure), but that time is done. We have hyperlinks now.

So I say this to denominational hierarchies: don't go away, but do let go. Let go of your perceived need to control emerging expressions of faith within you. If something seems "out of control", stop thinking you need to do something about it. Maybe it's out of control like Pentecost, or like the spread of the Gospel in the first century, or like St. Patrick's evangelism of the Irish. Maybe what you really need to do is pay attention, and fan the flames.

Or, just keep on doing what you've been doing, and become what libraries (so far) did not: obsolete.
Posted at 23:20

The hyperlink, when I clicked it, was the line "Are they Nazis, Dude? No, they're nihilists. Nothing to worry about." How very postmodern.

Interesting stuff, Mike. I haven't chewed on it enough yet to venture a response, but at first glance I tend to agree with most of what you've said. Like any model, the "web" model has some holes when it comes to describing human relationships, and life of course isn't lived wholly on the internet, but you've made lots of good points. I might come back to this one later when I have some more time...

This really resonsates with what Rex Miller writes in his book Millennium Matrix.

At Internet Evangelism Day, we also have an audio talk of his here:
Conference sessions.

His thesis is that we are indeed in a new communication era, shaped by computers and the Web.