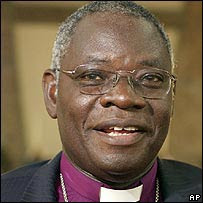 I feel like I really ought to reference this, a) because it's horrifying, and b) to balance the tongue-lashing I gave the Episcopal Church (TEC) and its Presiding Bishop a couple of posts back. Please read this article from Episcopal Cafe about Peter Akinola, the African Anglican archbishop who's been encouraging, enabling, and overseeing a lot of the conservative breakaways from TEC, particularly in Northern Virginia. Obviously more facts need to come out about this, but it seems there's some serious reason to believe (based on Akinola's own statements) that he's been supporting malignantly evil anti-Muslim violence in his native Nigeria. I hope the breakaway folks are paying attention, and praying hard about whether they really want to throw in with this man.

And I hope the rest of the Communion is paying attention too. Just because he's got big numbers of followers does not mean that this asshole is the future of the Anglican Communion, and allowing him to influence worldwide Anglican policy the way he apparently does seems to indicate that Anglican Communion leadership is one mother of an oxymoron.
Posted at 12:06

Wow, this is really incredible.