Letter to the Washington Post regarding the genocide in Darfur 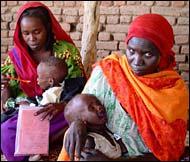 On Sunday, June 26th, I attended a public worship service at Freedom Plaza in downtown Washington. The purpose of this service was to call the U.S. news media to a sense of conscience and responsibility regarding the horribly devastating and shockingly underreported ongoing genocide in Darfur, Sudan. It’s been a long time since we’ve heard much about this crisis, so when I became aware of this series of services (http://www.worship4justice.org/), I suspect that I might have dismissed it as yet another pet cause—a real need, but one among many, and surely not a pressing issue for me. Otherwise, we’d be hearing about it, right?

Thankfully, that was not my reaction, due in part to one lonely, prophetic voice in the media—one publication with the courage to draw attention both to this horror and to our indifference to it. That voice? I’m sorry to say it was The Onion (http://www.theonion.com/), the satirical online mock newspaper. The Onion (June 8th, 2005) printed a fake opinion piece entitled “Well, I Guess That Genocide in Sudan Must’ve Worked Itself Out On Its Own.” Its closing statement: “Evidently, the hatred has been healed, peace has been restored, and the perpetrators of this unimaginable crime have been brought to justice. It sure is good to know it all must've turned out all right. It's like they say: No news is good news! Right?”

Right? In this case, nothing could be farther from the truth. But you wouldn’t know it from the reporting in the “real” news media. What does it mean when we must increasingly look to comedic entities like The Onion and The Daily Show for the courage to speak prophetically and point out the emperor’s nakedness (or apathy)? What does it mean when the “serious” news sources report endlessly on the ravings of a manic, possibly delusional film actor, but judge mass slaughter to be not newsworthy? I just did a search on CNN.com for “Darfur”. It returned eleven stories within the past month, only six of which were primarily about this genocide. I did the same search for “Michael Jackson.” Five pages of results. Fifty-one stories.

President George W. Bush has used the word “genocide” to describe this crisis. The President was right. But he and Congress must act if peace is to be achieved and kept. They must strongly support an international peacekeeping presence in support of African Union efforts in the region. But if American citizens remain silent, then our government will not act. And the ordinary citizen will be silent if he or she is allowed by a silent news establishment to believe that no news is good news. This story must be told, and I hope and pray that our news organizations do not leave it to the comedians to tell the truth and wake us up. If that’s the state of affairs, then not a single thing about it is funny.
Posted at 12:34