The Boy Who Mentioned Flow: A Fable 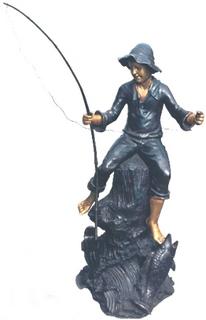 I was very pleased to recently run across an old edition of the little-known fables of the Greek sage Posea, known (to the few who know him) for turning well-known parables on their heads. This can be a valuable way to gain a new perspective, or perhaps a headache. In any event, one tale in particular was very instructive to me personally, and I thought I'd share it with my throngs of Constant Readers.

"The Boy Who Mentioned Flow"

Once there was a small village by a river. Most of the villagers were shepherds, making their living in the hills surrounding the town, but one young lad lived as a fisherman, spending his days by the river and supplying fish to the townsfolk. This boy was well-liked in the village. He was trustworthy and competent and thus earned their trust. He was friendly and thus earned their friendship. He valued harmony, and had harmonious relations with everyone. This was a boy who liked to get along and to see others get along, to "go with the flow," so to speak, and everyone felt that anything left in his hands was bound to go smoothly, with little muss or fuss.

One day, at a town meeting, the townsfolk spent quite some time complaining about another young man, a shepherd, who had recently amused himself by leading the whole village on a wild goose chase to fend off nonexistent wolves who were supposedly threatening the young man's flock. The fisher boy didn't think much of either the prankster or the town's reaction to him--just let it pass and move on, he thought. When they were finished venting, he mentioned casually, "By the way, the flow of the river is up this month. What with all the rain this spring, and the runoff from last winter, the water level's pretty high." The townsfolk greeted this news amiably, because they liked the fisher boy, and, as usual, he spoke as if everything was well and under control. "That's nice!" they said. "Hope it's good for the fish!" The fisher boy actually was a bit concerned about the increased flow, but he felt good that he had alerted the town, and since they didn't seem too worried, he supposed he shouldn't be, either.

A month later, at the town meeting, the villagers were once again stewing about the shepherd boy, who had pulled the same prank again. This time, they were contemplating some kind of reprisal, but the fisher boy suggested that the other lad had probably learned his lesson, and that they should let bygones be bygones. He also mentioned that the river's flow had increased even more, since the rains had continued, and that he'd never seen it so high. "Wow, how about that?" replied the townsfolk. Coming from the fisher boy, this didn't sound like anything to be alarmed about. Remarkable, maybe, but not alarming. The fisher boy himself had been more concerned than ever about it, but, well, he'd done his duty and informed them. Apparently they saw no reason for agitation, and he sure wasn't going to rock the boat.

The next month, the town met in the middle of a thunderstorm of Biblical proportions. Despite the weather, the townsfolk's spirits were up, because that joking shepherd had finally gotten what was coming to him, in their view: real wolves had attacked and, when the cynical villagers refused to come to his aid, had decimated his flock. The fisher boy again mentioned that the river was really, really high now. As they came out of the meeting hall, they were greeted, to their horror, by water rushing through the streets of the village! As a sheep floated by, baaing in terror, and the townsfolk began to run around shouting "Flood, flood!" and desperately attempting to salvage their possessions, the mayor grabbed the fisher boy by the arm. "Fisher boy, you work by the river every day! Didn't you see this coming? Why didn't you cry 'flood' and warn us?"

"But I did warn you!" replied the tearful fisher boy. "I've been warning you for months! You just didn't listen!"

So ends the fable. What I realized, after reading Posea's words, is that I'm the fisher boy! I do this all the time. Case in point: at home, I'm in charge of the financial spreadsheets, mainly because I have more patience for that stuff than Tina does. For a couple of months, I had been mentioning to Tina that we've been going over budget, our "cushion" was disappearing, I'd had to dip into our Christmas Club, etc. Finally, it came to a head and began to impact our get-out-of-debt plan. Tina was pretty angry and wanted to know why I hadn't said anything earlier--didn't I see that this was happening?

Another case in point: at work, we've been running out of space to store the huge files that contain our raw web server logs. For a long time we had disk space to store them all redundantly, but I've been telling my bosses and colleagues for months that we had run out of that space and now had them in only one place, and needed to seriously look at tape backup, etc. Today, we almost lost the only copy of the files for last September. If we had, it would have been fairly disastrous, and I'm completely sure that my colleagues would have felt that I hadn't communicated the fact that we were in a precarious situation, though I could produce an e-mail trail to the contrary.

I don't blame my wife or my co-workers about this one bit. It has to do with the way I unconsciously communicate, relate to others, and react to others' reactions, and now that I've perceived this pattern in myself, I'm hopeful that it won't be so easy for me to unknowingly repeat it. God, help me to discern that there's a time to cry "flood!" and to make sure I'm heard.
Posted at 21:19

Why didn't you warn me you'd start updating your blog?

hmmmm... Now this one gave me lots of food for thought. Now I have to say that I disagree with you. But what I disagree with is not that you didn't make yourself clear, but that you're beating yourself up about other people not listening. Re-imagine your story where the boy who cries "wolf" is not necessarily a prankster or even liar. Maybe he just gets a little bit over-anxious when he hears a noise in the night or sees rustling in the bushes and he over-reacts and starts yelling "wolf! WOLF WOLF WOLF WOLF!" Or maybe someone is paying him to watch the sheep and he's going to make darn sure he doesn't get fired; maybe he'll even get a raise out of protecting the flock so well. Unfortunately, the villagers become desensitized. The fisher boy speaks his mind and too bad for him (as well as everyone else) he doesn't get heard over the "noise." Is it the fisher boy's fault that he didn't go nuts in the telling of his warning? What if the water level was only a temporary thing and due to a drought the following month, the villagers thought as highly of him as the shepard boy? What if he went streaking naked up and down the streets with a bull-horn warning the villagers and the town actually flooded - he would be treated as a hero - but would the villagers be any more observant to lesser displays? I think this happens a lot in society - there's all this hype on the news - everyone trying to "cry wolf" louder than the next guy, and maybe something happens, but maybe it doesn't. We still complain about how "in your face" everything is, and ho hum, it's another day at level orange alert. Why should we blame our own ignorance on the guy who calmly tells us to "stay calm, but be vigilant?" Too bad there are too many shepard boys and not enough fisher boys in the world.