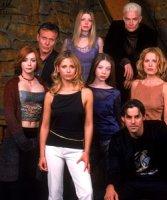 Buffy the Vampire Slayer. Pop-culture piffle or profound meditation on the life of a disciple in the service of good? If you think it's the former, then you obviously haven't watched it, and here's what you need to do. Get thee post haste to Netflix or Blockbuster or your friend who knows better than you do, and start watching from Season 1

, Episode 1. I'm not denying that it'll be quite a time commitment to make it through all seven seasons, but you may take as long as you need. Go now. Watch some Buffy. I'll wait.

OK, now I assume I'm preaching to the choir, which suits lazy me just fine. However, if you haven't seen the whole series, please note that BELOW BE SPOILERS. 'Nuff said. So: here's what I learned about discipleship from Buffy.

You don't choose discipleship; you are chosen. None of us gets to decide what gifts we're given, be they natural talents or spiritual gifts. Buffy never wanted to be the vampire slayer. She wanted to be a cheerleader. But she was given, Spidey-style, both great power and great responsibility as the Chosen One. What she did choose--and what she had to keep choosing again and again over the course of seven years--was to accept that responsibility and heed her call. The rest of the Scooby Gang didn't just choose their gifts either--Willow was naturally cut out to be both a computer geek and a witch. And similarly, we choose neither our original call, its shape, or the gifts we're given to respond to it--only whether to answer "here I am" and stay on the path.

Discipleship can be very, very hard. Buffy starts out at the beginning of Season 1 as a relatively carefree teenager who happens to be a superhero. By the later seasons, she is a weary veteran with the weight of a world she's saved again and again on her shoulders. She loses many friends and loves--some die, but others part ways with her because they can't live with who she is. She has to kill her true love to save the world. She sees both herself and her loved ones give in to awful temptations. She herself suffers death (twice), and is forcibly jerked out of heaven by her well-meaning friends. Buffy gets depressed, she despairs, she loses faith. For all the joy in her life--family, friendship, love--her calling is often truly a cross that she must bear. There is often a very steep price associated with discipleship.

Discipleship requires faith and commitment. As I mentioned, Buffy was tempted to abandon her calling many times. And who could blame her? But in the end, she shouldered her burden and soldiered on--largely out of commitment to her friends. And those friends, despite the stress and hurt they often shared, were similarly committed to her. Willow chose to forgo an ivy league education to attend UC Sunnydale and remain a soldier in Buffy's cause. Xander stuck by his friend Willow and redeemed her when she had embraced evil and was about to destroy the world. And none of them ever had any assurance that they would succeed or even survive, apart from their faith in each other and the cause.

Discipleship is a group activity. More than anything, I often think, Buffy is about the cost of discipleship. But I'm wrong. Just watch the show: what's Buffy about? Friendship. It's a show about friendship. No doubt. This is a show about a group of friends who love, support, challenge, hurt, even hate one another sometimes. But there's no doubt that they could not do what they do without each other. "What can't we do if we're together?" they ask in a big ensemble number in the deservedly famous musical episode. And this is how it's always been--Jesus didn't embark on his ministry alone. He did it with his friends--discipleship requires friends.

Discipleship requires laughter. Buffy never makes the mistake of taking itself too seriously. Anya, the ass-kicking, 1000-year-old vengeance demon, is deathly afraid of bunnies. Every single episode contains humor. And why shouldn't it? Every single day on this earth contains humor too, unless we're too busy being serious to notice it. We need funny stuff to keep going, and to keep us humble. Jesus used humor in his parables and teaching: Camel through the eye of the needle? Plank in my eye? Do we often miss this stuff in our quest for Serious Instruction from God's Word?

Discipleship requires forgiveness. In the course of the show, nearly every major character does terrible things which harm themselves, their friends, and others. And so do we. All the time. Buffy and her friends have many opportunities to forgive each other, and they generally do so in the end. And so must we, again and again. Because sin and temptation don't go away just because you've decided to become a committed disciple. Thank God for friends and loved ones with the heart to forgive.

There are probably more discipleship lessons from Buffy, but that's a good start. Now, it wouldn't surprise me if a reader who happens to be a committed Christian is wondering, "OK, so just who is Buffy supposed to be a disciple of, exactly?" And it's true that the show is intentionally vague and equivocal about matters like God and Christianity. In one episode, a character asks Buffy if God exists, and she answers "The jury's still out." Crosses are effective against vampires, but it's never quite clear exactly why that might be. So? Would it have been a better show if it were explicitly Christian and seen by a handful of viewers on the Family Channel? I don't know. I do know that it's full of lessons about discipleship.

So have you seen it yet? No? What are you doing sitting in front of a computer, then? Go to Blockbuster or something. Get yourself some spiritual formation and top-notch entertainment all in one convenient package. And come away energized to be (if this is what you are) a member of Jesus' Scooby Gang.
Posted at 19:45