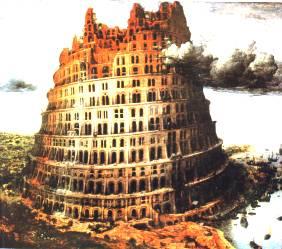 This morning, I attended Mars Hill Church, a small, nondenominational, emerging church that gathers at Jammin' Java, a very cool coffeehouse in the middle of Vienna, Virginia. I'm still processing the experience, and may have more to say about it later, but it was one of the most beautiful and God-centered worship services I can recall attending. It was, to use Dr. Len Sweet's acronym for emerging worship gatherings, EPIC: Experiential, Participatory, Image-based, and Connective. They included kids--and did it *well*, making it a good experience for both the kids and the adults. Everyone was very friendly--really! I think I have a lot to learn from these wonderful disciples, and I hope I can keep a conversation going with them.

But that's not what I wanted to write about, mainly. I wanted to share just a few of my thoughts on the teaching/discussion topic they chose for today: the Tower of Babel. Three kids (I doubt any of them were 10 yet) read the Biblical story (Genesis 11:1-9), then three other stories connecting it to the myths of other cultures (Greek and African) and to the New Testament story of Pentecost (Acts 2:1-41). Then, after a short preface connecting her own life story to these readings, the leader opened up the floor for discussion. It was a great discussion, and I apologize for not contributing these thoughts at that time, but most of them didn't occur to me until the next section of the service, a free-form worship time in which were were encouraged to pray, write, and/or draw. (So it often goes for us introverts.)

Anyway, this is what I thought about as I sat in silent prayer. (Write during church? Draw during church?? Um, er, sorry, I'm still recovering from the lack of hard pews and kneelers.) ;-)

Recently, I wrote to Mother Blair (formerly the priest in charge of Adult Christian Formation at my church, whom I miss muchly) that, while I don't feel like I'm to a large extent actively "part of the problem" (you know, THE problem--all of our man-made ills), I don't feel like I spend much time being part of the solution, either. Instead, I continuously devote huge helpings of time and energy to being what I called "part of the distraction." Endless amounts of my toil and thought go into accomplishing things that, in God's terms, are pretty much meaningless. I may not be actively increasing the misery in this world, but when it comes right down to it, what does making sure that nothing (I mean nothing!) comes between the American consumer and his or her destined web advertisement have to do with the work that Jesus has given his disciples to do? What does it have to do with being a fisher of men? Sure, I can do my best to make sure that my fellows on the distraction brigade have as pleasant a time as possible getting ads (and, secondarily, news content) in front of people's eyeballs. I can (try to) be an example of Kingdom living to the folks I work with. But it seems like so small a contribution to the reign of God.

Similarly, the Babel folks weren't evil. There's nothing in the biblical story to indicate that they were oppressing anyone (any more than was customary in those days), engaging in violence or terrorism, or even living immorally. What they were doing was investing *huge* amounts of time and resources (human and otherwise) in a big, ambitious project that was completely and utterly beside the point, from God's point of view. They were very industrious! That's good, right? Here in Northern Virginia, we're all really, really industrious! We accomplish tons. We're breathtakingly successful! We juggle marriage, kids, and high-stress, high-workload, high-paying jobs with the greatest of ease (sleep being optional). We have expensive houses, expensive cars, and expensive shrink bills, and it's all good, because just look at our success!

And I'm not saying that all of this activity is bad--by no means! Marriage and parenthood are divine callings, no doubt about it. I pray that those of us with spouses and kids are devoting the time to them that they deserve, and that we deserve to have with them. And a great many of our high-stress, high-paying jobs are absolutely doing lots to improve the lives of our fellow creatures. But I think it's probably worthwhile to reflect (as I'm doing now) on how much of this effort is part of the solution--God's solution--and how much is part of the distraction. Having some experience myself with the whole "divine wake-up call" phenomenon, I feel for the folks at Babel. I hope they found a good path, a godly path, to tread, in community with the fellow speakers of their new languages. And I hope each of us can also find a godly path to walk, with friends, as part of the solution. In Jesus' name we pray, Amen.
Posted at 16:15

Thank you for your gracious words about our church. We loved having you and you are definitely welcome any time - It's not for everyone, but it's a real lifeline to the people who do attend (at least it is to me).

I loved the gathering and really appreciate your hospitality. Those kids are clearly the beneficiaries of an uncommon combination of good "nature" and "nurture". :-)

I like the thought of a church where you get to write and draw pictures - very interactive. I know one of the most frustrating things I've felt during mass is the desire to raise my hand during homilies and ask questions. Though admittedly in the churches that I've attended, even if questions were allowed, it wouldn't be wise to vocalize them. Like (shameless comparision to wiser and more significant person) Socrates, my questions tend to get me in trouble. And we all know what happened to Socrates. I'm glad you find some comfort in the evangelical aspect of Christianity, especially with your "liberal" views. (Yeah, I read your page too and for the record, I'm more liberal than you on one axis, not quite on the other) Christianity sorely needs this perspective. I relate to your not participating at the time due to being an introvert...the internet is great for our kind, isn't it? Though I consider myself a Christian I do admit to being burnt enough times by evangelical types to deter myself from this activity. Most of my friends are neo-pagans or homosexuals who have had bad experiences as well. With them I often feel that the best promotion that I can offer for my faith are my actions rather than words - though (I read your other posts too) words are also necessary, sometimes I think the best words are simply the statement "I am a Christian." If the accompanying actions are upright and admirable, that declaration speaks for itself.

Anyway, just responding to your "Shameless Self Promotion." Hopefully this post was intelligible - I need new glasses and it's hard for me to focus on the screen 8-)
-Jacaranda, the Nefarious Aquarius

Ok, at the risk of being annoying...I was thinking more about this Babel thing. Well, maybe it wasn't *my* choice - you know that weird feeling you get when presented with an idea that you shove from your mind and then it immediately presents itself again in a different way as if to say..."Well? Pay attention this time." So the book I'm reading mentions about Babel again and I thought about it some more, because, quite honestly, I never really "got" the story before. I sort of thought, like yourself, hey - these folks weren't really bad - they just wanted to know God. I think the presentation of the story I was given as a youth put more of a "they were trying to prove themselves as good or powerful as God by building the tower" slant on the story. Subsequently, they were punished - scattered, divided from each other by language. Later I read the story in the Bible and just didn't get the same impression. Mostly I was confused. Anyway, the book I was reading compared philosophers to the tower builders. You have mystics who are trying to see eye to eye with God - hoping not to get swat down like flies in the process. But, wait a minute - aren't you supposed to want an intimate relationship with God? That got me thinking....always a bad sign. Anyway, I think that what happened to the tower builders wasn't punishment, but reward. These people genuinely wanted to know God, but God knew the tower thing was a lost cause, so he reveals to them his power, and then says - now that you know, go and tell the world. So the builders got what they wanted in a way they hadn't anticipated. The moral of the story being:
Be careful what you wish for.
But seriously, even mystics aren't happy all the time - some go through the periods of ecstasy and then become suicidal for various reasons - like they can't repeat the experience, society doesn't understand, etc. It may be a reward that feels like punishment sometimes.
I think it's interesting that people feel they have received a gift from the Holy Spirit when they speak in tongues, but don't interpret the Babel story similarly.
The one thing I think is (and I use this word cautiously) "wrong" with the Bible, is also what it "right" about it. A lot of the wisdom imparted requires interpretation on the part of the reader. This is actually a brilliant way to get the student to integrate the lesson. If you are just told information, it has less impact then if you are led to derive it yourself. The down side of this is that people will disagree, and we all know that historically when people disagree about religion they do so in a friendly, non-judgemental manner.
;-)