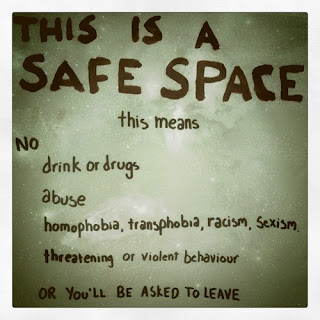 OK, them's all my bullet points.  I knew I was gonna be long-winded.  Holla back, y'all, if you have any reactions.  Peace!
image: Some rights reserved by Trucknroll
Posted at 23:01

Society is a safe space for hegemonic behaviour.
Examples - women are victims of violence and rarely the perpetrators.
Your example about being people threatened by homosexuals and vice versa, equates the social power of heterosexuals and homosexuals, which is false.

A safe space must counter hegemonic power and cannot pander to it.
If it pandets, t is not a safe space, it is a replica of society.