Cut from the Dive Team 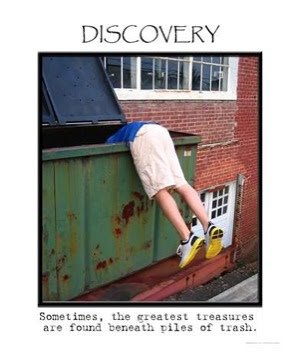 Well, Tina's and my first attempt at (sub)urban gleaning (which is also known by some other names with fewer high-fallutin' Biblical connotations) can only be described with one word: FAIL.

This is a practice which is becoming increasingly popular among the scruffy, remarkably shameless "screw alls y'all principalities and powers of consumer cultural captivity" Christian circles that our friends and we run in. (Well, as you'll see, Tina and I don't exactly run - it's more like stumbling along behind, just within sight of the pack. But anyway.) The idea is that we rescue perfectly good, unwanted food from its landfill destiny, thereby creating space in our food budgets, which in turn enables us to spend more money and time loving God and neighbor. That's the theory, anyway.

Well, despite expert coaching from our wise and experienced mentor, things didn't exactly go as planned. Our first target - the dumpsters behind a certain crunchy-granola-type grocery store - didn't seem to have much to offer upon brief inspection, and we didn't have time for more than that, what with being gently chased away by store employees.

So we went back to our mentor's house and returned in his car, because we could see that the dumpsters behind the bread-oriented restaurant next door were overflowing. Despite parking around the corner and stealthily sneaking up on said dumpsters, I returned to mentor's car with: two bags of actual garbage. No yummy, not-quite-day-old bread straight off the shelves for us - just trashed, used paper coffee cups and food plates. All the bags looked the same, and I was scared of getting yelled at again, so I grabbed two and ran. Yay me! Good thing it's garbage night.

We spun around behind two or three other such locations on the way back, looking for easy gleaning, but no luck.

If you're coming to our house on Sunday for the post-church Lenten meal, though, do not fear - we have ample fare from previous runs by our mentor and other experienced divers, so you'll not be deprived of your chance to eat genuine gleaned castoffs of the bankrupt consumer culture. Mmm-mmm. Them's fine eatin'. :-D
Posted at 00:43

No worries, I'm sure you will find success! I recommend a head lamp, which can be turned on after your head is in the dumpster (preventing employees from spotting the light and chasing you away.) That way you can see better what is garbage and what is disguised as garbage.