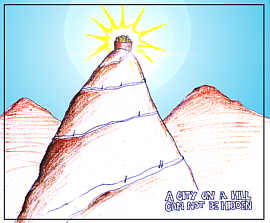 I was working on my spiritual autobiography for EFM Year 3 this evening, and I realized something interesting. Presently, I know (and count among my friends) a good many folks who are both

a) people of Christian faith who are serious about that faith, and for whom being a disciple of Jesus is a central, defining part of their identity that makes a big difference in their everyday life, and

b) people who are, generally speaking, at least as politically and theologically liberal/progressive as I am, and frequently more so.

So what? So this: for the vast majority of my life, I was utterly convinced that such critters did not exist. I would have told you that it's pretty much a logical impossibility, and that folks like that were a myth. If you were the kind of Christian for whom the faith really mattered and really changed your life, you were a fundamental evangelical, or at least a conservative one. If you were a "liberal Christian", the emphasis was on the "liberal," and the "Christian" was something you did for an hour a week for old times' sake. In my memory, these assumptions were confirmed over and over by repeated experience from my childhood until just a few years ago. (There were a few people, such as my grandfather, certain notable historical figures like MLK, and some Catholics I knew, whose witness dented that mental picture - but not enough to let me see how Christian discipleship could be something I could embrace.)

I can think of at least three possible explanations for this dissonance between past and present:

1) I've changed.
2) The world has changed.
3) Many of my assumptions about people of faith - despite being supported by long experience - were, to a large extent, misconceptions.

It seems pretty clear to me that all three of these things are true. But regarding #3, I wonder: if it was so easy for me to be mistaken about this, I'm probably not unique, right? I'm willing to bet that a lot of folks grow up with those same misconceptions. I think part of the reason is that progressive Christians have so overreacted to negative forms of evangelism that they (we) have often built our cities in deep valleys, and hidden our light under a bushel basket (Matthew 5:14-16).

That, or I'm just exceptionally dense. This is a distinct possibility, but the younger generations - especially the more progressive among them - don't exactly seem to be beating down the church doors....

By the way, I have great hope that both the Episcopal Church (if it can rise out of its current sexuality-issues morass and also remain rooted in authentic Christian tradition) and the "emerging church" (if it can find a positive identity and grow beyond defining itself by what it reacts against) will be on the vanguard of working to dispell this type of misconception in the coming years. In many ways, they already are, as are other segments of the Body of Christ (not all of which are led by Jim Wallis). But lest you think I'm all about congratulating those movements that I happen to be a part of - the next time I post, it will (probably) be to point out what I think is a danger zone for both liberal mainline churches and emerging ones. So, if you like danger, stay tuned.
Posted at 00:28

Your description (a & b) sounds like kind of people, in the sense that that I've been looking for such people to talk to on line for the last 15 years or more.

Yes, there are people like that, but they don't seem to want to talk.