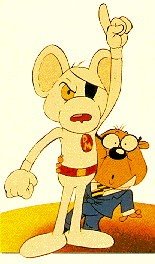 Yes! The presence of the invincible Danger Mouse over there can mean only one thing: this, at long last, is the post about DANGER. :-)

OK, all right, let me get one thing perfectly clear: what I'm not doing. I'm not trying to sound the alarm of "heresy!" or "revisionism!" or "satanic influence!" or anything like that. What I want to talk about is a question of emphasis - of the relative importance of various things that are all fundamentally good. Please keep that in mind.

Another disclaimer: I'm going to be making a lot of gross generalizations and oversimplifications for rhetorical purposes. I know I'm doing it. I think I need to do it to say what I want to say with anything approaching an economy of words. Despite that, please rest assured that I know reality is far more complex than I make it out to be.

Right: That'll do for the preliminaries. Here begins the post proper.

It seems an odd thing to say about the world's most notoriously conservative institutions, but I believe that religions are fundamentally about change. One of the interesting ways in which they differ is in the types of change they emphasize. For the purposes of my argument, I'm going to lump the types of change into three broad categories:
To continue with my broad generalizations, I'm going to claim that different world faiths place differing emphasis on these types of change. For example, Buddhism is all about "changing minds", with a secondary emphasis on "changing hearts", and very little tradition of "changing the world" (at least in the here and now - the quest for enlightenment is, ultimately, meant to transform the universe, but probably not in this lifetime). Hinduism has incredibly rich traditions for "changing minds" but has not been primarily concerned with "changing hearts" or "changing the world" (though this itself has changed somewhat since Gandhi).

In general, the "Western" or Abrahamic faiths - Judaism, Christianity, Islam, and their children - have been more concerned with "changing the world" and have been described as "historical" faiths, in contrast with the "Eastern" faiths, which tend to see history as cyclical. Judaism's emphasis has been on "changing the world" - a chosen people called to be a blessing to the nations. Islam has emphasized both changing the world and changing hearts. Both Judaism and Islam have rich "changing minds" traditions (Kabbalah and Sufism, among other strains within those faiths), but these are not the dominant voices within the two religions.

And what of Christianity? I would submit that any careful study of the Biblical tradition, the life and teachings of Jesus, the early church, and church tradition would lead one to the conclusion that the Christian faith has a dual emphasis: changing hearts (the Great Commission) and changing the world (the Great Commandment). There is a strong, incredibly important tradition of rich, beautiful practices for "changing minds" - from Jesus' solitude in the desert through the Desert Mothers and Fathers to Benedict, Juliana of Norwich, Teresa of Avila, Juan de la Cruz, Ignatius, Brother Lawrence, Meister Eckhart, Thomas Merton, Thomas Keating, etc., etc. (I don't claim to have those saints in historical order.) :-) These traditions are incredibly rich, vital, good, and necessary. I need to practice them much more than I do. But.

But..."changing minds" was not Jesus' main concern. It is not the main concern of the New Testament. So here's where I finally get to the part about "danger". The danger is one of emphasis - of priority among good things - but in my opinion it's real. Here it is: the liberal mainline churches and emerging churches need to be careful that they don't end up creating a version of the Christian faith that's "all about practice" - all about inward spiritual exercises aimed at "changing your mind". Spiritual practices are very much in vogue in both mainline and emerging circles. Here are a few examples.

This is good. It's wonderful that we're rediscovering these traditions. We need to keep exploring them. But "practice" is not the only thing, and if the Christian faith is to remain true to Jesus, I don't believe it's the main thing, either. There is also "changing hearts", and there is also "changing the world". Though Jesus was indisputably an Asian, Christianity is not an Eastern faith, and I think he would have us live as he did - recharging in solitude and prayer, and then getting our hineys back out there to participate in God's mission: changing the world and the human hearts within it. So, while we're reconnecting with our rich traditions of spiritual practice - while we're becoming intentionally practicing congregations - let's not forget that the purpose of these practices is to enable us to be ambassadors of the kingdom of God, participating in God's mission in the world.

That's all. No heretics or demons for Danger Mouse to fight. Sorry. :-)

HT: Israel, for getting me thinking about contemplative/Eastern practices and their relation to the Christian faith.
Posted at 22:23

This world could use change.

This is a completely new idea to me - that Christianity is not so much about changing minds as hearts and the world. I did sort of wonder how one would distinguish between having one's head changed and having one's heart changed, but either way, I guess the crux is getting out there and changing the world.

At the Emergent Africa conversation with Tony Jones that we recently had in Joburg we were discussing how so much growth and 'encountering' with Jesus seems to happen while doing in the world. For example, almost everyone there said they had had their most 'emergent' experience on a mission field somewhere (in another country or at a soup kitchen). Perhaps our hearts and heads get changed when we're out there changing the world??