You need to read this

It's Bono's keynote sermon at the National Prayer Breakfast yesterday. Bono, like Jacob Fuller in From Dusk Till Dawn, is one mean mmmm-mmmm servant of God. He puts the Millennium Development Goals clearly in front of the President and Congress, and dares them, from a faith perspective, not to devote another 1% of the federal budget to meeting those goals and extending a hand of partnership to Africa.

And check out this picture: 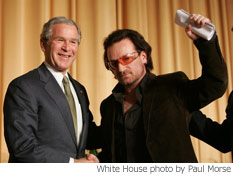 I love Dylan's commentary on it:

What do you think? I think this photo looks like President Bush was trying to get a photo that said, “I'm best-est friends with Bono,” and Bono, with his straight face, set jaw, downcast eye, and “power to the people” raised text, was saying, “it's about the message ... and if I have to fight you later to try to keep you on that message, I will.”

He sure looks a lot different than he did when he was married to Cher. I think he's probably been working out or something.