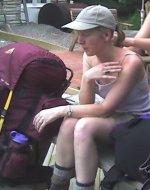 I've blogged a couple of times about works by one of my favorite storytellers, Joss Whedon (Buffy, Serenity). Another one of my fave modern storytellers is J. Michael Straczynski, the mind behind Babylon 5 and, most recently, a bunch of really excellent comics. (Joss writes kick-ass comics too.) Anyway, I've been watching Babylon 5 again from the beginning, which is the only way to watch it. (If you've just seen one or two episodes, and concluded that it was just Deep Space Nine with silly hair, I encourage you to rent the DVD's starting from Season One--it's one of the biggest, richest sustained story arcs ever told in moving pictures, and the characters--ach, don't get me started.)

So in Season Three,one of the main characters, Dr. Stephen Franklin, experiences a major life crisis. He is made to realize that he's become addicted to stimulants, and he resigns as medical officer on the enormous space station and goes on "walkabout". (Franklin, by the way, is a Foundationist, a member of a faith that studies the cultures and faiths of humans and aliens, searching for spiritual truth.) Here's how he describes walkabout:

"You just leave everything and you start walking. The Foundation adopted the idea from the aborigines back on Earth. The theory is, if you are separated from yourself, you start walking and you kept walking, until you meet yourself. Then you sit down and you have a long talk. You talk about everything that you've learned and everything that you felt. You talk until you have run out of words. Now that is vital. 'Cause, the real important things can't be said. Then, if you are lucky, you look up and there is just you. Then you can go home."

On April 1st of next year (an auspicious day, to be sure), my wife Tina goes on walkabout. When she heard those words again the other night, she said, "Yep, that's what I'm doing." She's become separated from herself. So in less than seven months, she'll sling her pack on her back on Springer Mountain in Georgia, and won't stop walking until she reaches Katahdin Mountain in Maine, 2,175 miles and six months later. Or, until she meets herself.

I'll join her for stretches--a long weekend here, a week there. But I'm not cut out to walk for six months straight. So for most of those months, we'll be apart. I'll be lonely, and worried, and I'll miss her almost unbearably. But I understand. She's become separated from herself. I can tell that as well as she can. We've been married 12 years, together 16 years, and friends 20 years. I knew her when she was herself, and I miss her. So I'll miss her hard for 6 months in hope of meeting her again when she's done. It worked for Dr. Franklin, though he had to get himself stabbed in the gut and almost killed before it did. Er.

So I ask your prayers for both of us, but mainly for her. I figure if everybody I know starts praying seven months early, I'll be able to worry less. Maybe. A little. :-) And I'll be praying not just for her safety, but her success in finding what she's looking for. Amen.
Posted at 21:36

J. Michael Straczynski is so strong and Babylon 5 is a phenomenal world with a great storyline. i agree, from the beginning -- and don't forget the feature length movies. the integration of the spiritual in that universe is, i think, really well done. not overdone. come on, with that name -- there is spiritual roots in all of it. If the future is going to look like any movies we humans have produced -- it will look like that.

ive seen the walkabout episode. dug it then.

i'll be keeping you and the wife in my prayers during this time. i think it's an incredibly wise thing she is doing -- and applaud both of you for allowing it to happen.

i've try to schedule time away to find myself, recalibrate the barometer, center my chi, and remember what is important and whats not. i think its incredibly important.

thanks for the reminder.