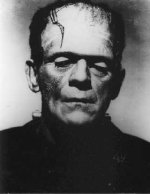 E te whanau / My brothers and sisters,
our help is in the name of the eternal God,
who is making the heavens and the earth.

So for a while - like, over a month - I've been teasing about an upcoming post on "Leadership and Technique" or whatnot. It was going to be an attempt to comment on recent events at both my big church (Holy Comforter) and my little church (The Common Table, formerly Mars Hill). My life's been fairly fully full o' stuff these days, so as you may or may not have noticed, it's been a long time since I've posted anything but a quick thing about big events in my personal life (wife leaving, dog dying, wife returning) or a link to somebody else's blog. So now I'm finally writing something again, but the events I wanted to write about are over a month old. That being the case, this post is going to be slightly less high-fallutin' than it was originally going to be. Instead of "Leadership and Technique", you get (with a nod to Boris Karloff) "Idolatry bad".

So here's my point: I think it's really, really easy for us talking monkeys to forget what is God and what isn't God. It's pretty simple. God is God. Anything else isn't. Two things in particular aren't God: nature/humans/revelation (stuff created by God) and tools/technique/technology (stuff created by us talking monkeys). When we become too attached (as the Buddha would say) to things in nature or to man-made things - when we grasp them tightly, elevate them, and treat them as absolutes - we are guilty, to some extent, of idolatry.

The Bible, especially the Old Testament, has a lot of stern things to say about idolatry, and for good reason. Obviously and primarily, idolatry directs "worship" of a sort away from God and toward something that isn't God. But secondarily, our gods tend to make us in their image, just as the real God does. When we idolize something dumb and wooden or cast in stone, it tends to cast us in stone. What I mean is: when we do this, we are acting on our built-in desperation for control and stability. When we grasp something tightly and make it an idol, we are looking for something set in stone, stable, that we can control and always expect the same results from. Something unchanging that we can count on. And so, very often, when we're in "idolatry mode", we stagnate. We resist change, both internal and external. We grasp our idol tightly and refuse to let go.

The problem with this approach, I think, is that the world God is creating isn't hospitable to this kind of behavior. You can argue until dawn about the Greek view of God (an unchanging, unchangeable archetype) vs. the Hebrew concept (changeable, temperamental, anthropomorphic), and I'm not going to contribute to that argument right now, but whatever you think about the nature of God, I think this world of God's is one in which change is the norm, transformation is a basic survival skill, and if you're sitting immobile in your corner grasping your idol, you're probably in for a rude awakening.

The quote at the top of this post is from the Compline (night prayer) liturgy from the New Zealand version of the Book of Common Prayer. I think the Kiwis have it right on several counts: our help is in the name of the Lord - not in nature, not in other humans, not in our technology, technique, and knowledge, and not even in an idolized, absolutized concept of God's revelation in scripture. Further, God is creating the heavens and the earth. Creation isn't something that happened at the dawn of time and finished soon after. Creation is ongoing. God's world is always changing, and we need to change with it. Standing still (for long) is not an option.

Specifically (and this is where this relates back to stuff from a month ago), among the things that I would call "tools/technique/technology" are all the methods we've invented for getting stuff done. This includes decision-making methods like consensus, democratic voting, and command decisions, as well as every type of church "program". Like everything else from God (nature, revelation, other people) and man (knowledge, technique, science), these things are fundamentally neutral. They aren't evil - all of these things can be good and can bring us closer to God and others - but they aren't fundamentally good either, because they aren't God. They aren't absolute, and we need to relativize their value and importance and to grasp them lightly. This is really hard, because of our aforementioned natural desperation for control and stability. The only way we can do this is to have a real, abiding relationship of faith, trust, confidence in the real God. And even when we have that, we will naturally and repeatedly fall back into our habit of tightly grasping one or another non-Divine thing.

Anyway, I think I may well be stating the obvious, but that was the train of thought that was on my mind on and off for the past month or so. Much of this was inspired by the excellent teachings of Fr. John Ohmer of St. James' Leesburg at the recent Holy Comforter Men's Fellowship retreat, whom I am privileged to now count among my teachers. So thanks, Fr. John, and thanks to the folks at both of my churches who got me thinking about this stuff.
Posted at 20:33

As one who casts idols of all sorts; to-do lists, "conversation", etc. I'm thankful for your reminder of what/who God is. Of great import is your second to last paragraph and the discusson surrounding the inherent goodness/evil of those things made (by God or humanity). Are you familiar with the theologian who posited this recently? Looking at my bookshelf I'm thinking Campbell in "The Word Before the Powers".

Ha! I got most of that stuff from Fr. John at the retreat, and he was going back to someone who's not recent at all - St. Ignatius of Loyola. Here's a pertinent quote from ol' Iggy. (I gots to be careful; I recently got in big trouble for calling Martin Luther "Marty".) Anyway:

Human beings are created to praise, reverence and serve God or Lord and by this means to save our souls. The other things on the face of the earth are created for human beings to help them in working toward the goal for which they are created. Therefore, I am to make use of these other things insofar as they help me attain the goal and turn away from these other things insofar as they hinder me from attaining the goal. I must make myself indifferent to all created things, as far as I am allowed free choice and am not under any prohibition. Consequently, as far as I am concerned, I should not prefer health to sickness, riches to poverty, honor to dishonor, a long life to a short life. The same holds for all other things. My one desire and choice should be what is more conducive to reaching the goal for which I am created.

Reading this, I realized there's a connection between idolatry and moral assignments. I've thought (and written) about this before -- that one can only apply good/bad moral judgements to actions. In other words, it's absurd to say a gun used in a murder is "bad" because it was the murder that was bad, not the gun. Also, saying a person is "good" or "bad" tends to defy the ability to change -- by saying "someone is ..." you're assigning a trait to them, whereas "someone behaved ..." grants the person the ability to act in a different way another time.

Flipping the argument upside-down, I guess I'd say that God is "action" or "change" itself.

Ha! This is good stuff, Jayce. I was actually thinking along similar lines on the drive in this morning - something like "God is all about transformation". I think you're onto something. You know you're doing the work of God if you're engaged in positive transformation - of yourself or the natural environment, or enabling someone else to undergo positive change. (The trick there, of course, is that we often don't know change is "positive" until after it's over and we've had a chance to observe its "fruits".) But this is the thing - persons (including most especially God) have the capacity for positive transformation. Non-persons don't. And non-Divine persons can't be trusted to be changing in a positive (that is, loving) manner.

A few things jumped out at me from this, and neither are 'core' issues you're writing about here, but rather things I never thought about: 1) that we tend to become the things we idolise - if you idolise stone you become stone...

2) the difference between the Greek and Hebrew perceptions of God, which made me realise that there isn't necessarily one absolute, right way to perceive and/or experience God,

It was very, very good to be reminded of things that 'aren't God' that we make into gods.