Claims about the Bible 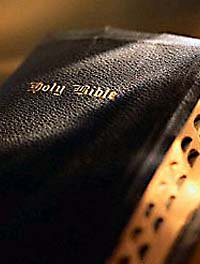 Well, several of us ended up having quite a conversation about perspectives on Scripture (among other things) in the comments on this post on 1 Corinthians 13 which I made a few days ago, not really expecting a response. Shows what I know.

That discussion prompted me to think a bit about claims Christians have made about the Bible. What follows is a list of some of those claims, with my brief thoughts on each of them.

Christians have claimed that the Bible is:

Literally true. This is the idea that every word of the Bible that isn't obviously and explicitly metaphorical (such as Jesus' parables) is to be interpreted literally: it really happened exactly as it is described, word for word, and no fair interpreting anything symbolically. This is the point of view which leads to young-earth Creationism and other absurdities. (I'm sorry; I wish I could be more gracious to my fundamentalist brothers and sisters, but young-earth Creationism is absurd.) Obviously, I don't subscribe to this point of view.

Inerrant. This (as I understand it) is the claim that, while it may or may not be valid to interpret some parts of the Bible as symbolic or poetic language, when the Bible does make factual statements, it is not possible that those statements might be in any sense false. I don't believe this claim either. I think the Bible may well say things that are factually false, because it was written by fallible humans--inspired by God, true, but I know of no compelling reason to assume that this inspiration would necessarily prevent God's human collaborators from doing what humans are prone to do: screw up. For example, I think that when the Bible claims that the prophet Elisha used his God-given curse powers to summon two she-bears to rip apart some children who were teasing him (2 Kings 2:23-24), the human author of that story was simply factually mistaken.

Infallible. This, I think, is the claim that when the Bible makes a prescriptive statement that might influence a believer's thoughts or actions, it is not possible that those statements are not what God wants us to do, unless they've been superseded by a later Biblical statement. In other words, what the Bible tells us to do is always what God wants us to do. I think a slightly milder claim is that the Bible is Authoritative: its prescriptive statements always have authority over the believer. I think often when people say "inerrant" they mean these things too, and the reverse may be true as well. I don't hold with these claims either. For example, as much as I love and value the Sabbath, I don't believe that God ever really wanted God's children to kill their neighbors for breaking it, as is prescribed in Exodus 31:15 and elsewhere.

Inspired. This is the claim that God's Spirit was involved, to some extent, in some mysterious way, in the composition of the entire Bible. This I do believe. So what does this mean, practically speaking? For me, it does not mean that I need to believe that the Scriptures must always be interpreted literally and contain no non-obvious symbolic language. It does not mean that every apparent statement of fact must be factually true. It does not mean that every apparent prescriptive statement must reflect God's will for us. What it does mean is this: as a Christian, I believe that all scripture is inspired ("God-breathed") and useful for teaching, correction, etc. (1 Timothy 3:16). Therefore, it's my duty to grapple with "all scripture" (by which I mean the Hebrew Bible and the Christian New Testament--other scriptures may also be "useful" but I'm not bound to study them) and to try to work out what truth the Holy Spirit wants to teach me through a given passage. It may be something different from the literal meaning, the facts presented, or the behavior prescribed in a passage. But as a Christian it is incumbent upon me to Take the Bible Seriously and work hard at allowing the Spirit to speak to me through its pages. And there's a further claim I'd make for the Bible: that for believers, it should be:

Identity-shaping. In brief, I think this means that the Bible should not just be a book we look to for facts, behavioral prescriptions, or even subtle inspiration: it should be a book that we allow to shape us, mold us, form us, sculpt our identity as Christians, and prompt us to both trust and action--to living its truth in our lives. It should be what Scot McKnight calls "living trustable truth", and at this point I'll just direct your attention to Scot's far superior post on this topic. Be sure to read the discussion in the comments on Scot's post. Good stuff.

OK, that's it for my thoughts on claims about scripture. Did I miss any major ones, or screw up the meaning of these? Did any of my perspectives on these claims irk you? Let me know.
Posted at 23:45