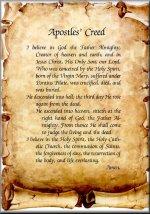 OK, I'm finally getting to where I wanted to go with this series, after far too much side trip, background, and disclaimer. So: If you're a Christian, why bother trying to be an orthodox Christian? Here are some reasons, in my opinion:

So that's my case. I really don't think it's going to convince anyone, but if it's food for thought, that's all I hope for. I'm very hopeful that we, the body of Christ, might to some substantial degree heal our bitter left/right divisions and meet on the common ground of generous orthodoxy. So many of my evangelical and post-evangelical brothers and sisters are working hard to convince their fellow evangelicals, for whom orthodoxy seems self-evident, to be generous too. I feel compelled to do my part (as a mainline post-liberal) to try to help my fellow liberals, for whom generosity seems self-evident, to reconsider orthodoxy if they have dismissed it in the past.

So that's my first fumbling attempt. Sorry it took so long. In my wildest prayers, I see us in the left hand and our friends in the right hand working toward a future in which we're both clasped at the heart of the Body of Christ. And I rejoice, though I also see that there is so much work that God has given us to do. God, be with us. Amen.

God be with you. Hopefully the filthy hippies will heed your word and advice. Great blog!

Thanks, car! Hopefully I won't forget that I'm the filthiest of the lot!

Interesting thoughts. Keep it up!

Although a bit of a peculiar way to say hi after a long time of no communication, but at least I'm reading the blog, right?

Anyway, you said, "All orthodoxy demands (in my opinion) is agnosticism tempered by an optimistic confidence in God" and went on to outline several logical combinations of alternatives.

Given that this "revealing" is guaranteed to happen when you die (I'm making an assumption instead of asking just to speed up the comment-response cycle) then wouldn't that aspect of faith be a claim to knowledge you cannot possess?