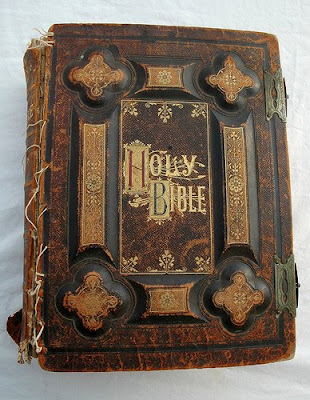 In Phyllis' Tickle's The Great Emergence, Phyllis identifies the death of Sola Scriptura - that great rallying cry of the Protestant Reformation - as one of the major factors ushering in what she calls "the Great Emergence" in the Western Church.

"What's this about death?" you might ask. "Sola Scriptura is alive and well - just ask the folks I grew up with." (And, obviously, some readers of this blog are probably committed to it as well - no problem! Phyllis and I are talking about a wider cultural/ecclesial trend which is far from universal.) But Phyllis notes the parade of cultural changes - from the abolition of slavery to women's rights to the acceptance of divorce to civil rights to gay rights, and more - which have been resisted using Sola Scriptura as a primary weapon ("The Bible is clear!") - and those resistance attempts have, on the wide cultural stage, ultimately and decisively failed. (Some - if not all - of those battles are, of course, still raging, but it's clear where Western culture is going.)

The combined weight of these has led to most of the Church either explicitly abandoning Sola Scriptura, implicitly abandoning it among the seminaries and clergy while letting the pew-warmers go on thinking it's the church's teaching, or ending up in rather indefensible paradox-positions on the issue (such as divorced-and-remarried pastors and bishops stridently condemning acceptance of gay leaders). There are, of course, plenty of fundamentalist holdouts for whom all of these issues (with the probable exception of slavery) are still non-issues and forever decided in the traditional manner - but even the vast bulk of the conservative evangelical churches bend a little on, say, racial equality, or divorce, or women speaking in church - despite the fact that it used to seem that "The Bible is clear!"

Good question. But I've been thinking about a corollary question. If Scripture is no longer to be considered our Sole Authority, what is the Bible's appropriate role in our lives, our faith, our communities, our worship gatherings? Of course, this is hardly a new question. Eastern Orthodox folk and Roman Catholics never signed on to Sola Scriptura, and have ancient answers to how they approach Scripture in these contexts. Same for many Protestant traditions, such as Quakers. Anglicans have had the three-legged stool of Scripture, Tradition, and Reason for centuries, and Methodists added the fourth leg of Experience long ago as well. And as my friend Ben detailed to me recently, it's never been as simple as Sola Scriptura for Lutherans either, despite the fact that Uncle Martin is credited with the phrase.

So I guess, after all that weighty preface, all I'm really wondering is: what is the role of the Bible in your life, faith, community, etc.? Does it look like Sola Scriptura? Or like the Anglican, Methodist, or Lutheran model? Or would you articulate it differently?

For me, the basis of my faith is Jesus, and my major witnesses to Jesus are Scripture, Community, and Experience. Scripture is my my main primary source for Jesus, and for me the Canon is made holy by its 2000 years of veneration by the One, Holy, Catholic and Apostolic Church (and, for the Hebrew Bible, going back much further among the people of Israel).

Therefore, the Bible is of great importance to my faith and life - but it's not at the center. Jesus is at the center, surrounded (in my mental map) by the witnesses to him in Scripture, in the lives of my friends, in the lives of Jesus-followers through history, and in my own life. Scripture is important to me, and carries with it authority (probably roughly equal to the authority of my dearest and wisest spiritual friends, or of my most profound personal experiences of faith) but it's not inerrant, it's not infallible, it's usually not literally historical. It doesn't need to occupy a central place - every single day - in my personal spiritual practice, my idea of worship, or my idea of the shaping of Christian community. It's appropriate that it be central a lot of the time, but it doesn't need to be all the time. (On the other hand, the Jesus whom I know from the Bible should be central, all the time - and there are probably few better ways to encourage this than to constantly return to Scripture.)

Anyway, that's what I think. What do you think?

image by Wonderlane (rights)
Posted at 11:09

Well articulated. I believe more and more people are coming to a similar place in their spiritual journey and it's nice to know they (we) aren't alone.

There have been many attempts to claim what is the best way to receive the revelation of God. It seems that some are born from a sincere search for truth while others may come from less noble motivations. I feel scripture is the heart of Christian spirituality, but not unlike other attempts to define God in finite terms it can lead us back into the treeless forest.