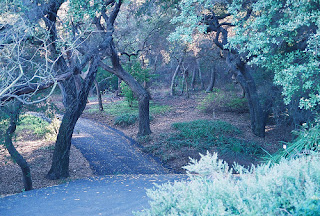 Somebody emailed me with a question about my perspective on Christianity and (vs.?) Buddhism, and as part of my response I rattled off a brief spiritual autobiography, since it seemed like important background for answering his question. The words felt like something worth keeping around, so I'm posting them here - not so much because I think you might find it interesting, but so I can find it again later if somebody else asks me a question that I think requires me to recount my entire flippin' spiritual journey in 1000 words or less. :-) So, feel free to ignore. Note that this is aimed toward answering a particular question, and hence it emphasizes some parts more than others. In particular, it says almost nothing about the last five years, which have been by far the most significant stretch of my spiritual history. Maybe someday I'll write a sequel. Anywho, here goes:

As a child, I was sort of brought up in the Episcopal (Anglican) Church, until I was confirmed at the age of 9, which pretty much marked the end of my family's association with church, apart from the occasional Easter appearance. (Which led me to believe that the priest at my local church only knew one story and only had one sermon.) I had a love-hate relationship with Christianity during my school years, as it seemed to me that everyone I knew who considered himself a Christian was either a) a fundamentalist wacko who was opposed to science, music, logic, and fun, or b) a lukewarm, nominal churchgoer whose faith only impacted their lives for an hour a week. I was always strongly drawn to religion and spirituality, but not to either one of those options.

In college, I minored in "perspectives on religion", and took many classes on both Western and Eastern faiths. I began studying faiths on my own time, and collecting a large library of scriptures and other books from the world's faiths. In the mid-90's, I created one of the more comprehensive and well-regarded interfaith index web sites with links to hundreds of sites on world faiths. (It quickly folded under the weight of the impossibility of maintaining all those links - this was back in the day when the best web site on Zoroastrianism was probably not www.zoroastrian.org but something like www.whatsamada.edu/~hmn1566/myzoroasterpage.html). Anyway, my point is just that I spent quite a bit of time through the 90's studying world religions, but always as an outsider. I had no religious faith or practice (though I was vaguely spiritual and vaguely theist, like many in the US these days).

In 1998, when I was 27, I discovered the hard way (only way) that I have bipolar disorder. As I was recovering from my first 9-month bout of severe depression, my shrink said to me something like, "It sounds like one of the habits you have that contributes to your unhappiness is a lack of mindfulness. You're always thinking about the past or the future, but you're never fully present in the moment." That rang true for me. Since I'd been studying world religions for years, I knew that the Buddhists knew all about mindfulness. So I sought out the local Buddhist communities. There were two in the phone book in Rochester, NY in 1999: a Zen center, and a Tibetan Buddhist center. The Tibetans were by far the more welcoming of the two, so to make a long story short, I soon found myself an insider in a religious community for the first time in my life, and I was a committed, practicing Tibetan Buddhist for the next three years. I received many empowerments and ordinations, and was a regular practitioner both at privately and in community.

After my wife and I moved to the Washington, DC area, I remained a committed practitioner for a couple of years, but I never really found a community that I was fully a part of, as I had in Rochester. I don't actually have the disciple to sustain a healthy meditative practice for that long without community support, so eventually, in early 2002, I woke up one morning and realized that I was no longer a practicing Buddhist, because it had been months since I'd actually practiced Buddhism. In my understanding, Buddhism is fundamentally a set of practices, not a faith or belief system - so if I wasn't practicing, I really couldn't fool myself that I was a Buddhist. I spent the rest of that year sort of sadly missing something that I'd felt I was missing for most of my life, but briefly found.

My wife and I spent Christmas 2002 with her grandparents, who lived in a small town in southwestern Arizona where most of the residents were either retirees, or folks who used to work at the mine before it closed down, and were now (many of them) struggling. We were to spent Christmas day itself at they Southern Baptist church - a prospect I was dreading. But it actually changed my life. The people of that church brought in a fest of potluck food, and opened that church hall to the entire town. There was no price of admission - folks were expected neither to pay money nor to listen to a sermon or evangelistic sales pitch. There was just love and hospitality and sharing. These were people whose faith clearly made a big difference in their lives, but who didn't seem to feel compelled to be jerks about it. I flew home from Arizona thinking, "Maybe I should give Christianity another shot after all."

When I returned home, I Googled for an Episcopal church in my area, and attended one the next Sunday. To make another long story short, I became more and more involved in Christian discipleship and ministry, and by the time I renewed my baptismal vows on Pentecost of 2003, I was a believer in Christ and a follower of Jesus. I'm still a part of that Episcopal community, though today I spend most of my energy with a smaller nondenominational "emerging" church community full of people I love dearly.

And we love you dearly, too, Mike. I thank God for you often. :)

she of little faith said...

Just found your blog via Episcopal Cafe and I've been poking around here a bit. You're going on my bookmarks.

I'm drawn to Buddhism because of the meditation practice and its ability to help me live in the moment, but to me it's not much of a religion, and whether I like it or not, I need that connection with God. So I struggle with Christianity. The Episcopal Church is where I've chosen to do that struggling.

Thank you for sharing your perspectives; I'm enjoying reading them.