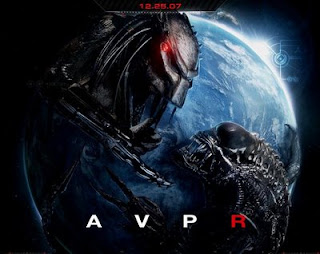 They threw in some vaguely plausible never-before-seen Alien evolution as a plot device to ensure that there would be lots and lots of Alienses around, and the movie contained exactly one (1) Predator, who was utterly irrelevant to the plot, and not even particularly badass. The very final moments of the film did throw one nice bone to fans of the Alien franchise, though, so they get points for that.

I hope they let the franchises lay fallow for a while, now, until somebody comes up with an actual good idea for another movie. Alas, Tina and I were part of the problem by adding to the opening-weekend box office. But Alienseses make Tina happy, so we went. :-)
Posted at 21:50

I totally wanted to go to this movie, expecting to learn a lot more about the Predator race. How lame that they did not say much about them. Urg