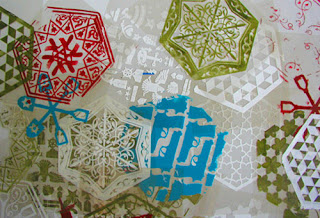 So if you're my friend, and you've actually slogged through all of those words I just spewed into your poor, unsuspecting feed reader (I mean, you'd have to be my friend to have done that, right?) - then please, please, please, I beg you - help me to see and be critical of my patterns. I don't want to be stuck seeing the world - and the people in it - in calcified, distorted ways. Your caring honesty is my only real hope to avoid that fate. So, both in retrospect and in advance, I thank you for that honesty.
Posted at 00:29

Mike, I'm really interested by the possibilities of this kind of stuff. I once had a colleague who was dyslexic. What fascinated me about Andrew was his capacity for backing up unusual things against each other, engaging the gears at different ratchet points to me, and shooting off in unusual directions. It was like a kind of primitive super Mario game thing, where the rest of us were on the travellator above Andrew, but he was having all kinds of fun in a way which was logical, but not quite my logic. I came to feel spiritual capacity is something released by backing up unusual images/ experiences against each other, and letting the sparks fly — I am sure this is something to do with how artistic creativity works. It's a way of using our patterning capacity to transcend our patterning capacity...

Mike, this is quite good. Thanks for sharing this, was a nice lift to my Monday morning (I find posts that look behind life's curtain quite uplifting...).

Can I have your permission to reprint this on Transforming Society?

Thanks, +Alan and Ken! And yeah, +Alan, I think it's an incredibly important insight - and a challenging yet hugely rewarding practice - to learn to cherish the point of view of folks who see things really differently from you. It's not easy. I'm not good at it. But I want to be better.

I'm sure I needn't tell you how nicely this dovetails with the Buddhist concept "emptiness".

This reminds me of my philosophy of change in myself. I meet a lot of people who thwart change dismissively: "Oh, I can't change." I see things that I'd like to change about myself and believe I can do it instantaneously. But, as I say, I have this dinosaur body that needs to be guided toward a new pattern (but maybe that's just a pattern unto itself).

It's fascinating to see it from a different perspective: that we, as pattern-seeking beings, are inherently resistant to change rather than dynamic, alive beings who are in constant change. It's almost as if our lives -- the calcification of our behavior -- prepares us for the Big Calcification in the end.