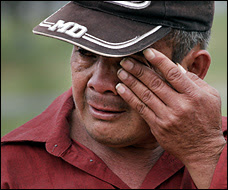 UPDATE: turns out that Arlington does have a County-supported, official day labor site, much like the one that no longer exists in Herndon. That's what I get for shooting off my mouth. :-) So, yay Arlington, and boo Herndon. Still, all the more reason not to give up on Herndon, 'cause I really don't want my neighbors to have to move to Panama or to Arlington in order to feed their families.

My good friend Israel posted on his blog about two local governmental jurisdictions (the one where I live, and the one where he lives) and their respective attitudes toward immigrants who depend on day labor to survive.

This issue has been weighing on my heart, at least a little, for a while - at least since I moved to Herndon and started getting the free newspaper and reading the latest chapter of the saga of the day workers' center on the front page of each issue. Here are some random thoughts:

Somehow I think us "legals" taking the side of the "illegals" will make a difference. Even if just a show of commitment to honest people trying to overthrow the stereotype of criminals by DOING AN HONEST DAY'S WORK... rather than stealing for their hungry family.

I also like your idea of working with Reston Interfaith to help these guys... certainly if their doing day labor and may have families, and are illegal they probably have all kinds of needs outside just work... like children who need healthcare, wives who need time off... perhaps a need for some recreation at cox farms?