One day in "The Lead" 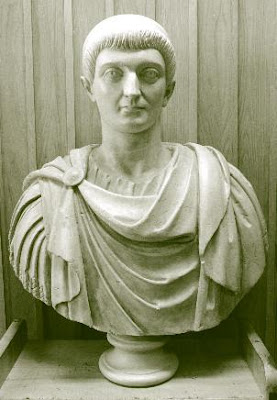 There's a very cool Episcopal media website called "Episcopal Cafe". I subscribe to several RSS feeds from the Cafe, and they're frequently good food for good thought - and not just for those of us afflicted with affectionate interest in the latest gossip and goings-on within my particular institutional church tribe. The Cafe is cool. (A good friend of mine is an editor, BTW.)

One of the major feeds on the Cafe is called The Lead. As you might guess, it's the main "news" feed. (I put "news" in quotes not to mock the term, but merely to emphasize that this particular feed is meant to be "newsy" news, whereas other feeds on the site might comment on news items but are more opinion-, spirituality-, and/or art-driven. Got it?) That said, the items in The Lead often come with quite a bit of editorial spin. Not a bad thing, just worth noting. Nothing wrong with having a point of view.

So anyway, as I read the news items coming in to the Lead feed yesterday, April 30th, I have to say my level of disgust was, well, great enough to write a disgusted blog post about it. (Note: my head-shaking was at the news itself, not at the way it was reported.) Here are some headlines; click through if you want the gory details.

Williams won't allow Robinson to function as priest in England

Two views of the future of the Church of England

Not guilty by reason of nonexistence

Here are stories - story after story - about people trying to maintain control (and/or jockey for more of that control) over other people within the Body of Christ. Who can function as a priest (I thought we were all priests??) or a bishop here or there? Who has the authority to steer or oversee whom? Who is permitted to act in "full communion" with whom within the Body? Who is permitted to bless which relationships, and how? Most importantly, who is on control of whom - given the power and authority to determine all these things for others, whether they like it or not?

These are stories about Episcopalians and Anglicans, Methodists and Presbyterians and Lutherans, and I hope you'll forgive me for reading them all as being largely about two things: control, and politics (which is merely the outworking of control). I love the Church very much - I really do - but I have to admit that I'm at a loss as to why in any way the Church is improved by adding these kinds of politics to it. This is why I'm a big believer in strong networks of free, intentionally diverse congregations - networked to help each other and serve the world, but with no-one trying to maintain control and uniformity among them.

Admittedly, interspersed among these political stories, on that same day, were some joyous tales of the Church being the Church, and blessing the world as Jesus meant it to do:

Episcopal artists as they see themselves

These stories warm my heart and make me thank God for God's Church in this world. But these are all things that could also be accomplished by diverse congregations working together in strong networks in partnership with the mission of God. Without the need for all the freaking politics of control.

Denominational friends, if there's major stuff I'm missing here about the blessings that these Constantinian hierarchies carry with them that we would miss without them, please enlighten me.
Posted at 08:22

Thanks for your comments. Good questions - some I ask myself frequently. Some of the reasons for the mix of hierarchical/democratic bodies called churches are facilitating the very networks you recommend, giving structure to the diverse groups- ways to communicate and connect, assure accountability, education and support. Maybe with the internet this will be easier to do without structure. For the Episcopal Church it is the way we work - and those of us who are ordained in TEC vow to work within that structure.

Appreciate the comments, especially since I was at the helm of The Lead most of yesterday.

We certainly do seek to maintain a balance in subject matter which I think is one of the reasons The Lead has succeeded. That said, church politics isn't going away in the current environment and some days it will be particularly heavy. Contrast this with the imbalance at certain other sites.

Still, while we don't make the news, I agree we don't have to focus on conflict and we don't intend to.

(footnote: the story on the Methodists and Lutheran in communion is the category of an positive giving-up-control story although it is about ecclesiastical structure)

Having spent more time at your blog and visiting your links I appreciate your perspective - r.e. the institutional church - even more. There is much to learn about other ways of doing and being church.

Amen, bro'! This is the unfortunate thing about any human collective, the inevitable creation of ingroups and outgroups to cement ingroup unity, and the fierce defense of the "rightness" of one's own position. The fight for who defines the Anglican/ Episcopal church is nasty but so very normal.

It's really a basic feature of human cognition. We learn meaning by sorting things into this and that, naming those things and assigning value to those things, and unfortunately we continually do that with people-groups and individuals as well. There are always people who will use our valuing to rise to, and fight to maintain, power.

Makes a person want to escape into the woods sometimes... or to Canada. or to the woods in Canada.

I'm so pleased you linked to my blog! I've only met you once, many moons ago... I hope to actually see you and your wife in person at some point.

ps. I am so very sorry about the loss of your Father, but I am glad to see you engaging so vividly with the world on the heels of that.

I see your frustration on this one, and as a participant in the Episcopal discernment process, raise you $20. I haven't given up yet partly b/c of my belief (crazy hope?) that the Anglican communion can represent an institutional expression of the "strong networks of free, intentionally diverse congregations" of which you speak. It's not perfect, but maybe transforming? Keep your ears peeled about what's happening in the Diocese of Olympia (Western Washington) over the next year or so. Karen Ward's a world-changer...

i think mike is wondering if we are maybe not about our fathers business like we think we are - but instead spending an inordinate amount of time trying to figure out who gets to sit on the right hand, and who on the left.

his question on hierarchy / politics in the church is not:
is it newsworthy
is it the way weve always done it
is it human nature
or modernism
or copying corporate efficiency models
or any other excuse for how we got here or why it is the way it is

he's asking the schismizers - if he missed something and there is utility for hierarchy?

still don't get the question? ask yourself this: if you had it to do over again - would you intentionally design this much hierarchy into the church?