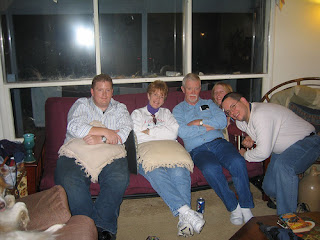 For anybody who saw my last blog post about my Dad's brain tumor, but hasn't been following our new family blog for updates on his progress, I wanted to do a quick update.

Tina and I are back home in Northern Virginia after spending about a week in Charlotte with Dad and Mom, my brother Sean and his fiancee Anna, our Aunt Joan, and (for part of the week) our Uncle Edd and Aunt Linda. Tuesday and much of Wednesday were spent at the Carolinas Medical Center in Charlotte, where our expectation was that Dad would be undergoing brain surgery to try to remove as much of the tumor as possible. The risks of this surgery were scary: Dad might lose his ability to speak, or large chunks of memory, or mobility, etc. Literally just before the surgery (during pre-op), we found out that the plan had changed: Dad's surgery was to be just a biopsy, followed by a program of radiation and low-impact (i.e., low-side-effect) chemotherapy to shrink the tumor. The steroids he's been on for two weeks have been pretty effective in treating the relatively minor symptoms he's experiencing now, so we have a lot of hope that the radiation/chemo program will be even more effective in fighting this thing. Dad was home again Wednesday afternoon, full of energy and appetite. :-)

So mostly we're coming away from this long, difficult week with a deep sense of relief and gratitude that Dad didn't suffer any of the major risks of the originally-planned surgery, and we're settling in for the long haul both hopeful and thankful, as hard as the road ahead is bound to be. Many, many thanks for your ongoing prayers, dear friends.
Posted at 17:55